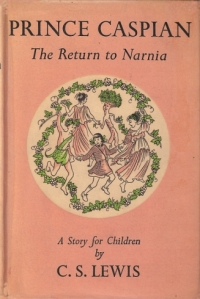 On the opening page of Prince Caspian, we learn the four Pevensie children have returned to their routine lives in our world. Though The Return to Narnia is a children’s story, I’ve always thought a composer’s musical track might have interspersed strands of ominous, suspenseful music amid a light childlike melody to foreshadow the doom Narnia has undergone as these former Kings and Queens of Narnia tumble back into a new adventure.

If the four children experienced any premonition, their primary emotion was most likely excitement. Certainly, as The Lion, The Witch and The Wardrobe closes, Peter, Susan, Edmund and Lucy are eager and hopeful to get back to Narnia. The Professor has assured them of a return, but he also tells them it’s unlikely their next visit will happen via the wardrobe.

This time, the “door” into Narnia is a train station (can you say Harry Potter?). Even after the children have arrived in Narnia, several chapters take place before they realize they’ve returned to the world they once ruled. Naturally, once they confirm they’ve come back to Narnia, they’re stunned; only one year has passed in our world, but centuries have passed in Narnia since their absence. 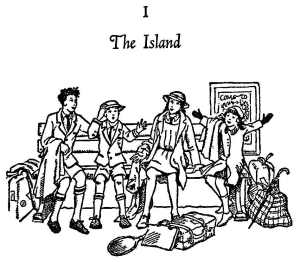 Children have a great talent for adaptation. They’re resilient. A child whose world has been turned upside down rarely collapses on the curb in panic. Perhaps it’s due to their limited ability to assess the situation. In this instance, even as they recognize Narnia is vastly changed from when they left, they have yet to comprehend the desperate war into which Narnia has descended. Instead of despairing, they set about to restore the Narnia they knew.

Having been a soldier himself (volunteering while still a teenager), C. S. Lewis knew full well the horror of trench warfare in World War I. His experience did not, however, turn him into a pacifist. (See chapter three in his book The Weight of Glory.) Indeed, Lewis exhibits admiration for the knight as an heroic figure, a warrior who adheres to a strict moral code in battle as well as daily life. This picture of the honorable and good knight is personified in Prince Caspian.

Consider some of the elements of Narnia‘s war. When the four children exited Narnia (ending the first book), the kingdom enjoyed peace and plenty. As the story unfolds in this volume, we learn Caspian the Conqueror (a man who was part Telmarine) has conquered (i.e. war) Narnia. Through the generations, other wars have crushed Old Narnia. The current monarch (usurper), Miraz, murdered his brother Caspian IX. When a son is born to succeed Miraz, Caspian X (rightful King and nephew to Miraz) suddenly becomes expendable. Intrigue, murder and wars have become the daily habit in Narnia.

The condition of Cair Paravel (initially unrecognizable by the children) is a fitting metaphor for the plight of the Narnian world:  chaos, people, dwarves and animals divided and afraid, citizens of Narnia who disobey King Miraz are slaughtered. The young Caspian (for whom the volume is named) lacks basic facts about Narnia’s history. Critical details have been scrubbed, leaving him ignorant and malleable. Perhaps as serious, he has little understanding of the qualities required for his knightly-kingly position. In most respects, Caspian is completely helpless for the station to which he was born.

An unlikely title character, in my view. Nevertheless, Caspian does one thing right:  when all seems lost, he blows Queen Susan’s Horn to summon help, though he has no idea if or from where the help may come. It is the desperate act of a desperate man. May I say it?An act of faith.

Of course, when the Horn sounds, four Pevensie children who’ve been awaiting their trains back to school are instead transported through time and worlds to a Narnia they don’t recognize. Throughout the book, there are images of hard times and discouraged people. Having watched the advance of Nazism, Lewis witnessed how war beats down a people. As in the war against Hitler, Narnia needed deliverance from tyranny.

Ah, not only did the Horn summon the Pevensie children. Aslan came as well! Lucy is the first to see him, though his image is faint. When she hears him call her, she wakens from a deep sleep and walks to where the trees are festively dancing around him, making “merry noise.” Lucy gratefully greets Aslan, but chides him because he hasn’t performed as she expected. “I thought you’d come roaring in and frighten all the enemies away — like last time.” (I hear the whine in her voice, don’t you?)

Soon enough, the Lion (who has dealt gently with Lucy) resumes his king-of-the-kingdom mastery over Narnia. Under the gleam of the moon, Aslan “lifted his head, shook his mane and roared … with a sound, deep and throbbing at first like an organ beginning on a low note … becoming louder … till the earth and air were shaking with it.”

In this moment, the doom of Narnia is defeated, even though the war to accomplish victory has yet to be fought. The final chapters relate the waging of war in true knightly fashion. Caspian accepts his crown as King of Narnia. All appears to end happily.

But there is also unwelcome grief. Another lump in my throat when Aslan reveals to Peter and Susan that they will not return to Narnia. I feel deep disappointment as if I were personally being shut out from Narnia!

Of all the Narnia stories, I have felt less affinity to Prince Caspian. I’ve wondered if it’s due to Caspian as the main character seeming less than heroic. (He does of course eventually learn from High-King Peter how to be a worthy King.) I’ve read other criticisms of the book that are similar to mine. Shortly before Lewis’s death, he mentioned in a letter that Prince Caspian had sold much less well than other volumes in the series.