In yesterday’s post, I suggested all of us have similarities to Ebenezer Scrooge − we each have a Ghost of Christmas Past in the sense that our experiences have helped shape our character (or lack thereof) to some extent.

In A Christmas Carol, author Charles Dickens lays out (through the Ghost of Christmas Past) Scrooge’s earlier life and how his experiences engrained in him deep bitterness and hurt. Because Scrooge fed those feelings, he had become a terribly unpleasant and inconsiderate old man. 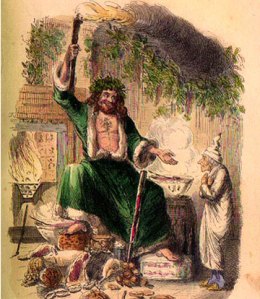 Again using the example of Scrooge’s night-time visiting spirits, we pivot here from Christmas Past to Christmas Present.

Scrooge’s Ghost of Christmas Present seems a dearer spirit, “a jolly Giant” dressed in a “green robe … bordered with white fur” and wearing on his head a “holly wreath” set with “shining icicles.” Christmas Present carries a torch that he uses to spread goodness and cheer wherever he goes. He also carries unpleasant knowledge (such as a potentially shortened life for Tiny Tim) that he only reveals to Scrooge in snippets.

So what makes the Ghost of Christmas Present so relevant for us today?

Christmas Present is today, this season in which we’re engaged (some of us more than others). This is our currency … the now. There’s no bringing back Christmas Past. Each one in the past has vaporized to memory.

Plus, there’s no guarantee we’ll experience a Christmas Future (as Scrooge experienced the Ghost of Christmas Yet to Come). Dropping dead before Christmas, dying on Christmas Eve, Christmas Day, we probably all know someone who has experienced such sorrow. Dying before next Christmas may not be a pleasant thought, but it happens. (Forgive me please, if this brings up grievous memories for you!)

We only have today, this moment. I think Scrooge’s Ghost of Christmas Present tried to impress upon Scrooge the importance of making each moment count, and this ghost “lived” the perfect example. The once-vibrant spirit ages so quickly in the tale, Scrooge questions the sudden change. The Ghost tells Scrooge his life is “very brief,” in fact, the length of Christmas Day only.

If we look at our lives this way − making today count and living each day with the same gusto and vigor − the briefness of life becomes irrelevant. I was recently reminded of someone whose life epitomizes this truth.

The man’s name was William Borden, heir of the Borden milk-products family. He was born in 1887 and enjoyed all the advantages of wealth and privilege. While still a teenager, he made a momentous decision to become a missionary and he focused his life with this goal in mind. (Of course, this wasn’t his family’s goal for him; they wanted him to take over the family business.)

Borden entered college at Yale University, spent four years there and went on to Princeton Theological Seminary for three additional years. Friends were dismayed at Borden’s single-minded devotion to serve as a missionary; they considered he was “throwing his life away.” In contrast to this thinking, Borden continued to move forward. In his journal, he wrote:  “Say ‘no’ to self, say ‘yes’ to Jesus every time.”

While he was still attending seminary, he gave away his personal fortune. Inside the flyleaf of his Bible, Borden wrote the words:  No Reserve.

After completing his education, job offers followed. He turned them down. Writing once more in his Bible, he added two new words:  No Retreat.

Having chosen to serve as a missionary to China, Borden embarked on his voyage. Beforehand though, he received word his father was seriously ill. Instead of returning immediately to his father’s side, he continued on his journey. Another statement was added in his Bible:  No Regrets.

But Borden never arrived in China to begin his ministry. He was in Cairo when he contracted meningitis and within a month the 25 year old had died. Did he (as some classmates suggested) throw his life away?

It’s true he never achieved his goal of being a missionary to China. Nevertheless, the accounts of the years before he set sail indicate he was already living a life in service to his Lord. He was living in the Present, doing what he believed God wanted him to do now, at each moment. Each activity into which he poured himself became an example to those who worked alongside. Newspapers far and wide carried the sad news of his death.

Borden’s short life conveys the urgency that the Ghost of Christmas Present taught to Ebenezer Scrooge. In thinking of gifts for loved ones, our presence is often our best present.