Here’s another quirky film I watched this week. Safety Not Guaranteed from 2012 provides an intriguing premise:  an unusual want-ad sets three magazine employees on the trail of a reclusive (perhaps deranged) fellow who insists he can time-travel … and means to do so with a companion he hopes to hire via his want-ad.

Of the four main characters in this film, not one of them was familiar to me. I note that Aubrey Plaza is a cast member of Parks and Recreation (a television comedy series I’ve never viewed). In this movie, she demonstrated great timing and subtlety. Then there’s Jake Johnson, a comedian whose resumé includes other shows I don’t know. Mark Duplass plays the recluse, again, not someone I recognized. Karan Soni may be the least recognizable of them all.

In some regard, my unfamiliarity with these four actors may have increased my enjoyment of the film. I had no expectations or preconceptions (based on a familiar body of work). This left me free to engage with the film.

The film is strange in places and the actors give uneven performances. Especially with the slightly off-center situation, there were moments when I wasn’t comfortable liking any of the main characters. From the beginning, I wanted to like (sympathize) with them, but at points they didn’t earn my sympathy. I wanted to trust the mysterious recluse, tried to convince myself he wasn’t driven by lunacy. I felt stuck in a kind of limbo, unable to say I liked the film, but equally unable to dislike it.

Perhaps that’s due in part because the premise made me want to like it and see the premise successfully implemented.

I mean, who doesn’t enjoy a movie about time travel?! When I Googled “movies about time travel,” I didn’t realize there were so many! Last fall, Esquire (online) offered their list of the ten best time-travel movies. I liked some of their choices, didn’t care for others. Screenrant.com also listed their top ten. USAToday offers a similar list. Even ScienceNews.org constructed and posted a list. 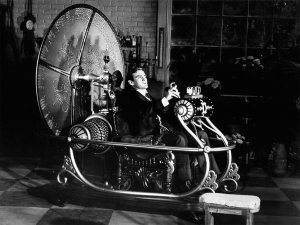 No, I’m not going to follow suit, except to mention 1960’s The Time Machine (with Rod Taylor) as one of the most memorable for me and then 1980’s Somewhere In Time as one of my favorites.

In the twenty years that passed between these two films, Gene Roddenberry had successfully introduced Star Trek (The Original Series) to television viewers. By mainstreaming science fiction onto the small screen, including the fictional USS Enterprise’s transporter (an impressive teleportation machine), Roddenberry gave viewers a chance to conceive time-travel by other means than Rod Taylor’s clunky chariot-like contraption (pictured above).

What surprised me about Safety Not Guaranteed is how the film revisited the clunky contraption of 1960. The time-travel machine of this film is situated on water but it’s every bit the contraption Taylor’s chariot seemed to be. By showing this picture, I hope I haven’t ruined the movie if you decide to watch it. (This picture doesn’t really give anything away, except perhaps to underscore this was an exceptionally low-budget film.)

The concept of time travel seems (to me) embedded deep within the human psyche. In fact, as I write this, the Star Trek phrase echoes in my memory:  “… to boldly go where no man has gone before.” Remember those words from the opening narration? There’s that “inconsolable longing” — the sehnsucht — C. S. Lewis referred to in his letters! That yearning is certainly here (the going where no man has gone before) and seems to be ubiquitous.

Actress Aubrey Plaza (who plays Darius in Safety Not Guaranteed) portrays in this movie her struggle in trying to maintain journalistic objectivity and remain a keen, trustworthy observer. The story (she wants to write it herself to earn respect from her colleagues) will require an objective (not emotional) presentation.

So every time she finds the need to focus, she asks herself:  “What’s your mission?” It’s a necessary exercise because when she’s with Kenneth (the time-traveler), she finds his narrative compelling. But when she’s with her two magazine associates, she’s torn between their cynicism and Kenneth’s believability.

One of my frustrations is my distractibility. (You may face similar challenges in your life.) I can get sidetracked on minutiae when I know there are other more important things that require my attention. In re-centering myself, I’ve not used these words before, but now I will be reminded, “What’s your mission?” A great question to keep me on task!

4 thoughts on “What’s Your Mission?”