Continuing my series of Sunday posts based on The Book of Job, we move to Chapter 4 in which the first of Job’s friends attempts to shed light on exactly why Job’s life has so desperately fallen apart. Even though readers of this book know (from Chapter 1) the groundwork for this earthly struggle has been laid in the heavenly realm, Job and his earthbound friends don’t. Hence, their observations resemble a freshman level college class where eager students gather to discuss Coping With Severe Stress in Ancient Times.

In Job’s case, I think his friends initially wanted to see for themselves exactly how horrendous Job’s suffering actually was. Yes, they thought seeing might provide confirmation of an external cause for Job’s suffering. Seeing with their eyes would be better than turning away, because whatever pitfalls Job had fallen into, understanding Job’s misery might better gird them from falling into the same pitfalls.

Job has already vented his bitterness in Chapter 3 and now his friend, Eliphaz the Temanite, responds. As I read the chapter, I see characteristics of a diplomat in Eliphaz. He reminds Job of all the previous occasions when Job has been a rock for his friends. He’s “helped the tottering to stand,” provided counsel for friends in need and shown strength to his neighbors.

As Eliphaz recounts Job’s leadership and courage though, one begins to anticipate the but to come. Yes, Job, you’ve done all these great things, BUT … there’s obviously sin somewhere in your life. Eliphaz adopts an interesting approach, claiming a mystical experience (vision) in which he has intuited esoteric wisdom explaining the truth … that Job’s calamity is due to hidden sin.

Eliphaz isn’t without sympathy. He even points out factual information about Almighty God. But his theology is woefully incomplete. We know this because we’ve already been privy (from Chapters 1 and 2) to two conversations between God and Satan that explain the cause for Job’s suffering! Like Job’s other friends who will speak in subsequent chapters, Eliphaz offers an explanation that is rooted in his personal, small view of the world. And he’s not finished; he’ll provide further explanation in Chapter 5.

The sonnet below captures Eliphaz offering his take on why Job’s world has fallen apart. I’m not sure Eliphaz offered much comfort to Job. I have to remind myself not to follow the example of Eliphaz. Sometimes, a friend just needs to sit quietly. As the song says it, In good times, in bad times, That’s what friends are for. Being there is what a friend does … even if they’re short on answers to life’s most inscrutable questions. 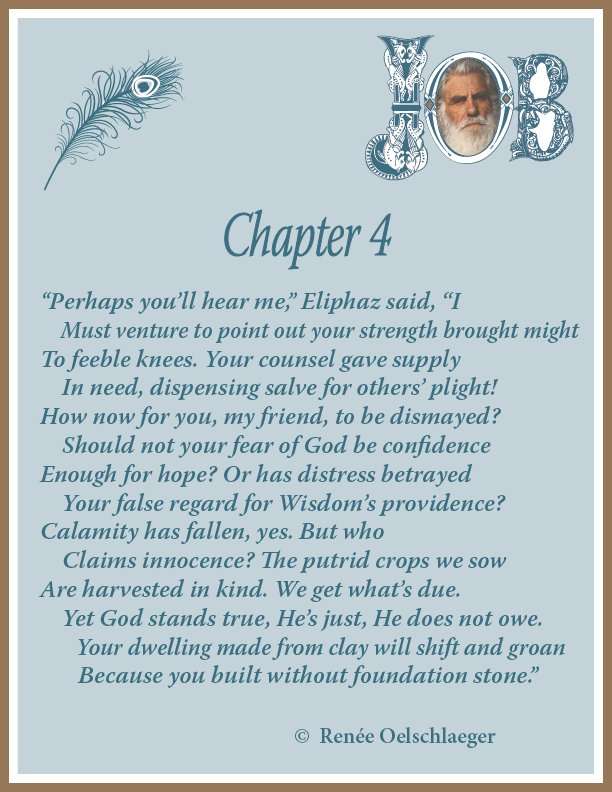 One thought on “What Are Friends For?”