For a writer, reading the following words may strike right between the eyes:  “How long will you hunt for words?” Maybe it was more of a two-by-four upside the head, but I definitely reacted to this question from Job 18:2. It’s Bildad speaking, responding to Job’s monologue from chapters 16 and 17, and Bildad comes out swinging. He’s anxious for Job to suspend what he considers a monumental (and verbose) pity-party.

The way I read the chapter, it reminds me of the scene from Moonstruck where Cher slaps Nicholas Cage and tells him “Snap out of it!” Bildad’s attempting to do the same thing:  Snap out of it, Job! You’re letting this suffering thing affect your ability to listen and learn from your friends!


The early verses of this chapter present an ironic opening, especially since Bildad and his friends seem to have no lack of words themselves! Therein is a lesson, I suppose. Oftentimes when we interact with people who are suffering (whether visiting them at a hospital bedside or in a café over a cup of coffee), our discomfiture with the situation may drive us (me) to chatter, having the tendency to jabber, trying to find a conversational landing spot that doesn’t seem awkward. (Maybe I’m the only one who does that?)

Every time I read Bildad’s question, it throws me. “How long will you hunt for words?” I’m a writer … it seems I’m always hunting for the precise word, the exact word that isn’t just okay but a word that really nails what I’m trying to say!

Through further study of the chapter, I’ve come to understand the phraseology doesn’t strictly reprove one’s desire for precision of words. One version (Easy-to-read Version) asks:  “When will you stop talking?” The sense (it seems to me) is stop talking and give us a chance to respond!

Another version (The Message) suggests the sense that Job is engaging “monotonous word games” and needs to be more serious. This theme carries through a number of translations, the implication being that Job should let his friends continue rendering their criticism and remain quiet while they eloquently diagnose his problem. When Job speaks, he’s cutting into their time for constructive criticism.

This accusation – about being a windbag – has been a constant gripe through previous chapters. In the preceding section, Job asked “is there no limit to windy words?” but Eliphaz was equally condescending (“should he argue with useless talk?“) as was Zophar (“should a multitude of words go unanswered?“).

Lest anyone misunderstand, I don’t think their expressions can be dismissed as comparable to today’s trash talk between friends. Job’s comforters were seriously annoyed with his poor-me behavior and Job (I think) was likewise hurt by their patronizing assumption that he was duly suffering because of his sin.

ASIDE:  Recall, if you will, the first two chapters of Job where Satan and Almighty God are discussing Job. Satan wanted to demonstrate his contention that if Job was badly buffeted, he would quickly forsake his trust in God. Consequently, God permitted Satan to pummel Job.

Bildad builds his case against Job, first accusing the suffering man of continuing to indulge his denial of sin. Bildad makes the common mistake in believing whatever circumstances Job was experiencing were the direct result of sin in Job’s life. Bildad wasn’t kind and he painted a scenario in which Job’s wickedness literally deserves damnation and obliteration.

As I composed the sonnet below, resounding within my subconscious were the words:  “How long will you hunt for words?” In composing a sonnet, my word choices are tested repeatedly. Eventually, I have to stop the hunt for words and permit them to work on their own. That, I have done. 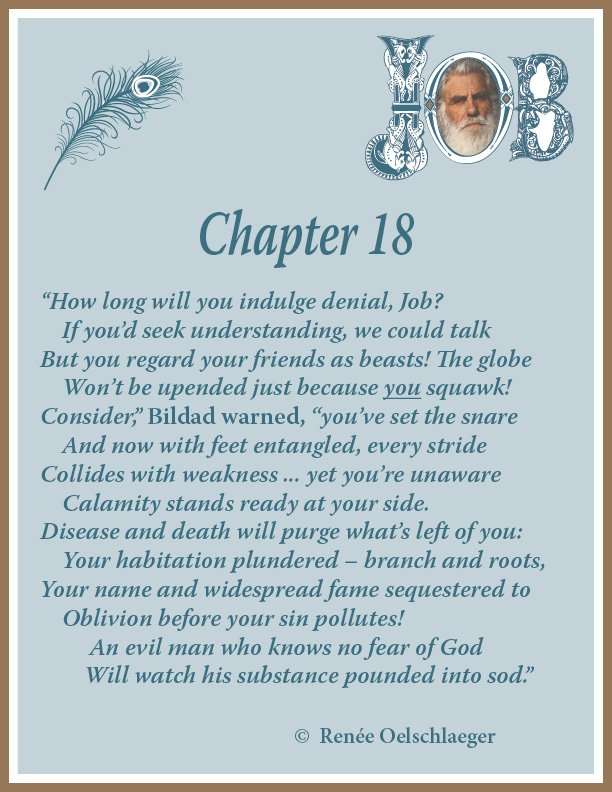 One thought on “How Long the Hunt for Words?”