You may actually have enthusiasm for this renewed political season to be kicking off … I’m not. I knew it would be upon us soon enough, but I’ve dreaded hearing various candidates announce they’re launching their campaigns. It seems as though the wall-to-wall nature of media and news has spawned a monster, like a massive and disgusting tapeworm that devours from within.

Over the last couple weeks, we’ve been treated to announcements of the campaign launches of several contenders for President in 2016 … as if any one of us had to guess they were already running? The promise of political advertisements starting to flood the airwaves is, likewise, dreadful (in my view). Must we really tolerate this onslaught for now as well as for another eighteen months? 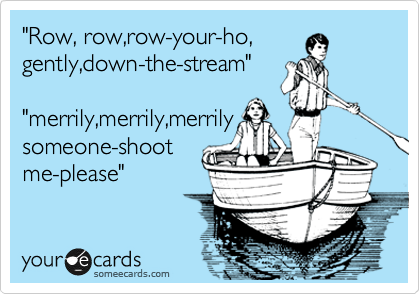 Nonetheless, here we are. And no doubt, in days to come, even more wannabes will be dipping their toes into the proverbial pool. Social media is already awash with comments (and various ravings) both pro and con for the recently announced candidates. Argh!

A month ago, I posted my thoughts about the expected launch of the Hillary Clinton campaign. As many of you are aware, she announced yesterday the official beginning of her campaign. Although her announcement didn’t surprise me, I’m appalled by her insistence. Even though mainstream press people seem to love her, I suspect there are just as many self-serving journalists who’ve anticipated potential missteps she’ll make and the multiple sensational stories that will be generated thereby.

I was also genuinely appalled at the Time post by Dr. Julie Holland, positing Hillary is “biologically primed to be a leader.” Do you think there wouldn’t be a huge outcry if this story had been written about a male candidate for president? But the Time writer will be given a pass because the article features Hillary Clinton.

The sonnet I’ve composed for today’s NaPoWriMo month-long celebration has its roots in my long-term observations of political campaigns and political candidates. I remember way back when Bill Clinton bemoaned the “politics of personal destruction.” This memorable phrase stuck in people’s minds and was also a useful way for Clinton to deflect criticism of his personal behavior by blaming his critics.

Over the years, I’ve observed the “politics of politics.” It’s no longer necessary for a candidate to have an impressive resumé, as long as he or she wants to run for elected office. Specific accomplishments are so twentieth century, doncha’ know. And honestly, filling a seat in the state house / governor’s mansion / congress or wherever doesn’t (in my view) qualify as an accomplishment! Short some actual achievements, filling a seat only proves you have the ability to kiss babies and shovel verbal manure.

I suppose both this post and the sonnet below qualify as a full-fledged rant. Good thing the sonnet is such a flexible (and forgiving) form! 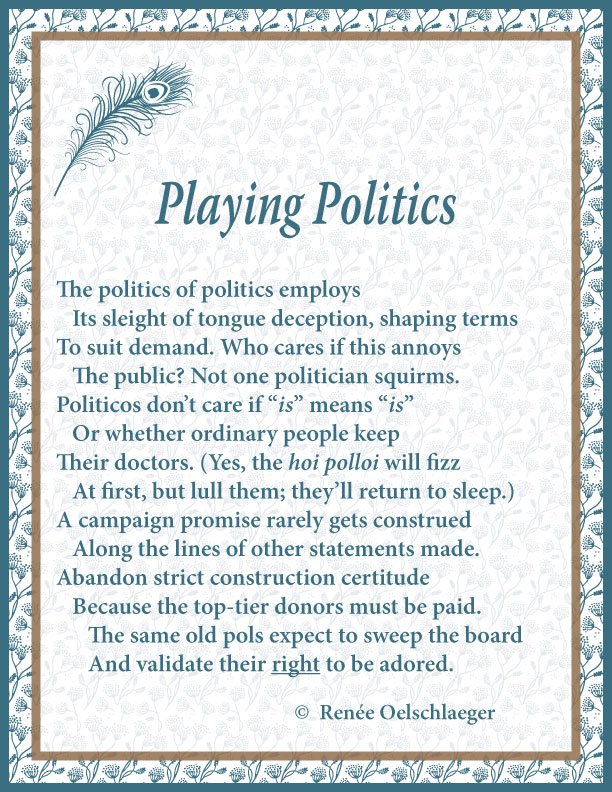