What do you do when a man maintains his innocence in the face of persistent accusations? In wartime, combatants are conditioned to undergo extensive interrogation without blurting out any secrets. Name, rank and serial number but nothing more. For the title character in The Book of Job, he continues in chapter 27 to argue he’s a man of integrity. Come on, my friends, my comforters! You may waterboard me but I’ll give you the same exact answers! My torment isn’t because of wrongdoing!

An interesting change has taken place though. Bildad, the last comforter who accused Job, spoke in chapter 25 and his speech was brief. The other comforters seem to have lost their vigor or have become weary of Job’s unwillingness to admit wrongdoing. Has Job convinced them he’s a righteous man? Or have they simply done with the discourse and backing away from their friend in anticipation of a lightning strike targeted at Job?

Conversation can, on occasion, wear a person down, especially when there’s a strenuous debate and both sides believe their position is most tenable. We have this group of men essentially debating the character of one in their midst. Is Job righteous? Of course not! If he were a righteous man, why would God cause him to suffer this way? We all know God must punish the wicked because of their wickedness!

The alternative – Job is correct in his innocence – is perhaps a more frightening reality which none of Job’s comforters want to consider:  the Lord disciplines those whom He loves. (See Hebrews 12:4-6) And in Job’s case, as I’ve mentioned earlier, God has allowed Job to be tormented by Satan’s hand.

In chapter 27, Job vociferously emphasizes his personal righteousness. The image is of a man standing accused at the bar and refusing to bow his head in shame or guilt … because his conscience doesn’t rebuke him. He is truly innocent!

Once Job has restated that position, he contrasts his life to the wicked man’s life. Job has hope … the godless man is bereft of hope (verse 8). Job has confidence God will hear and answer his cry (when the discipline is finished) … the godless man will be alone in his distress (verses 9-10). Beginning with verse 11, Job tells his companions: “I will instruct you in the power of God.” But he reminds them they’ve all seen the power of God … and yet they still act foolishly – presumably refusing to acknowledge God’s power at work.

Then Job describes how a wicked man might prosper his whole life, build a great nest-egg, pile up “silver like dust,” make plans for his descendants to inherit the bounty … and all of the things the man has gathered around him can be gone in a flash. (Job speaks as one who understands the vanishing aspect of possessions.) As Job continues his description, he seems to imply what’s left? For the wicked man, nothing.

Job will continue developing this idea in chapter 28 (slated for my post next Sunday).

Today’s sonnet expresses Job’s desire to trust God for the outcome of his suddenly-miserable life and to acknowledge God’s power is always trustworthy. 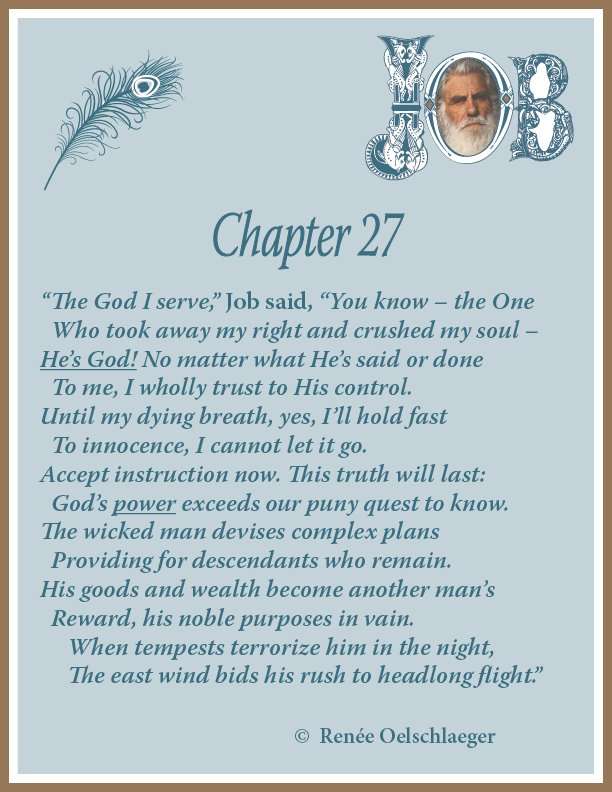 2 thoughts on “A Legacy of Integrity”