When it comes to Wisdom, The Book of Job comprises one of five books of the Old Testament loosely referred to with the subheading wisdom literature. While Job has its historical context, the foundational questions about God and man, about Creation and the nature of evil and suffering, form the book’s decidedly philosophical tilt. This book is a serious conversation between the Creator and His created ones.

Following up on yesterday’s post about The Principal Thing, this post continues my Sunday discussions about Job with chapter 28 as today’s focus. Given the chapter’s overall flow, it complements yesterday’s post nicely.


If Job had ever feared losing his position (I hesitate to label it a job) as resident sufferer or old-time patriarch, he could easily have set his sights on being the resident wise man, philosopher and poet. In chapter 28, Job masterfully lays out his view of Wisdom. This chapter is a sharp contrast to previous chapters because Job ignores his oozing wounds and instead ponders what’s truly important in the Universe.

Comparing the riches of a physical world in which man mines valuable products hidden deep in the earth’s caverns, Job suggests how foolish man’s value system is. The human eye perceives precious things around him – gold, silver, sapphires, etc. – all of which are gathered into man’s collection. Not an animal, not a bird has ever ventured into the depths of the earth to view the gems and riches it contains. But man has gone deep, the perils of mining notwithstanding.

In all his searches over the planet, though, Job points out man has been unsuccessful in finding Wisdom (and with it, understanding). Job attributes human qualities to the sea and the earth who both answer the question, Where is Wisdom, by responding “It’s not with me.” This is a beautiful reminder of how man searches often and in every place for the One Thing to satisfy but his hands come up as empty as a prospector panning for gold. Amassing all the precious gems in the world can’t equal, Job says, the inestimable value of Wisdom.

Today’s sonnet condenses bits of Job’s wisdom into fourteen lines. Where is Wisdom and from where does it come? Job answers his own questions by saying Wisdom is established by God – in the same way He gave “weight to the wind” and “meted out the waters” and “set limits on the rain” and “a course for the thunderbolt.” In essence, Job says God declared (established) those things. He also declared “the fear of the Lord, that is Wisdom and to turn away from evil is understanding.”

Please don’t misunderstand this “fear” as in being scared … though fear might be a normal response given Hebrews 10:31 says:  “It is a fearful thing to fall into the hands of the living God.” But no, this is an honest and reverent acknowledgment of who God is. Wisdom compels us to bow our heads in His presence. Job was beginning to understand. 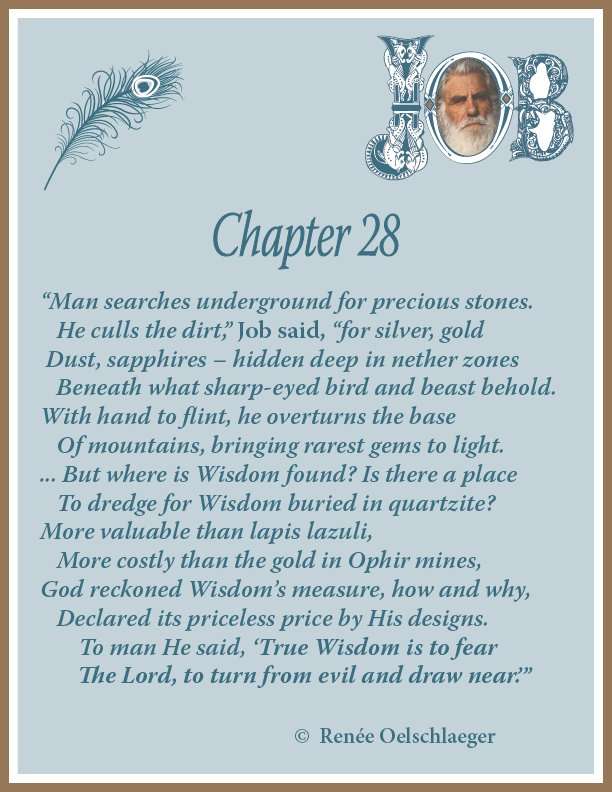