A recent television show, titled Forever, offered the intriguing tale of a man who experiences a kind of immortality. He’s a couple hundred years old and if he dies or is killed, he returns. The premise had promise but earlier this month, after just one season Forever was cancelled. (I suppose when it comes to episodic television, there’s no such thing as Forever … unless it’s Law & Order.)

From the moment we’re born, it seems we consider ourselves invincible. It’s in our nature to view the world through what I would call forever eyes. As I’ve noted before on this blog, C. S. Lewis explained it this way:  “… we were made for another world.” Because we were made for another world, our eyes want to envision forever, our fingertips ache to touch forever, our hearts long to connect with forever. Each of these impulses is innate.

Reading a column today titled Deathly Fears, I appreciated author Marvin Olasky‘s comments. He poses an interesting question:  how to face the overwhelming but inevitable end of life? This is a situation each of us must weigh. Olasky quotes several scholarly individuals whose observations are thoughtful if unsatisfying. He contrasts their thoughts with the biblical view … using the analogy of a car careening toward a dead end versus a plane moving to the end of a runway. Even though the runway ends, the plane takes flight.

Today’s sonnet considers aging and the inevitable end of life. We’re unable to conquer aging (though many try) and the end of life comes no matter what we do to chase it away. How to face it? Olasky provides the perfect answer. 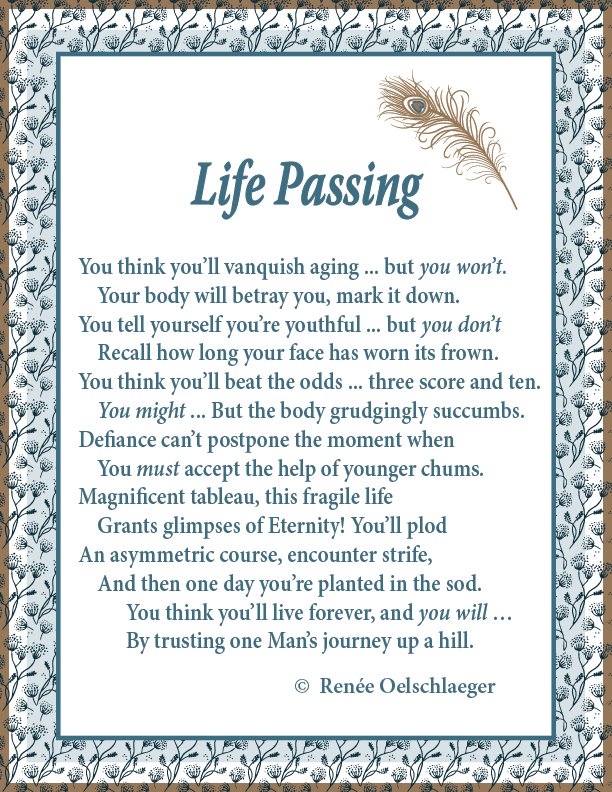