Filmed in black and white, readers of the LA Daily News voted in 1997 that Casablanca was the greatest. In Leonard Maltin’s Movie Guide, it’s deemed the “best Hollywood movie of all time.” It’s number two on the American Film Institute’s 100 Greatest Movies, number six on The Hollywood Reporter’s 100 Favorite Films, and number thirty on the IMDb Top 250 Movies of All Time list.

However, not every list aggregator gives the film high marks. On the RottenTomatoes list, Top 100 Movies of All Time, Casablanca is curiously absent … nowhere in the first 100 titles! The RT critics note the film is: “An undisputed masterpiece and perhaps Hollywood’s quintessential statement on love and romance.” Still, the movie’s apparently not enough of a masterpiece to be included with their top 100.

Even though I’ve viewed the film numerous times, when I notice it’s scheduled on TCM, I’ll watch. I’m drawn in by the intrigue and the romance and the tale of love gone wrong. It’s as if I’m watching the film for the first time. The last time I watched it, I couldn’t help myself … I was fascinated by the lyrical quality of certain phrases in the script. The sonnet below begged to be composed!

Unfortunately, I couldn’t work the line, We’ll always have Paris, into this particular sonnet … so another sonnet may develop from that single line. It’s on my to do list. 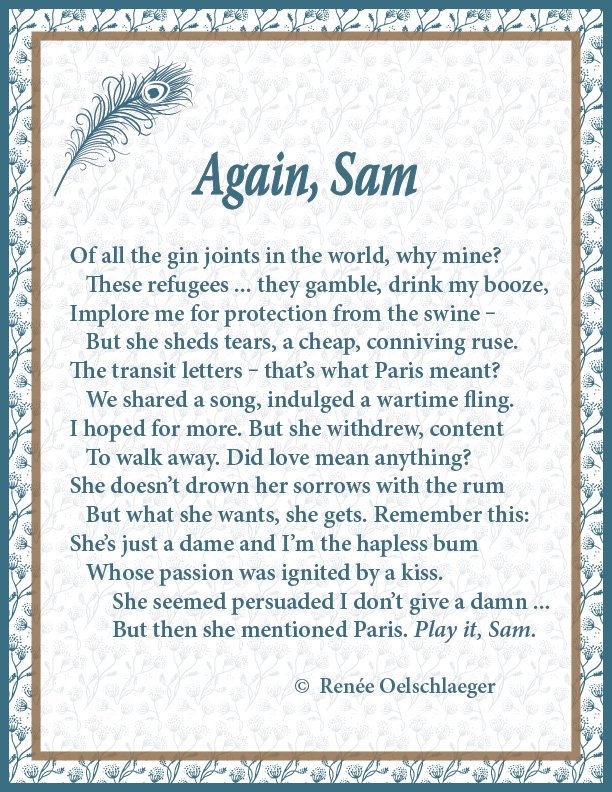 4 thoughts on “We’ll Always Have Paris”