Whether defense or prosecution, when a trial attorney comes to the conclusion of a trial, it’s time for summation. At this point, the jury will hear a summary of all pertinent facts and evidence before they reach their decision. The attorney wants to deliver a strong summation in order to sway the jury toward a particular outcome. The same can be said of Job as we arrive at chapter 31. Job and his comforters have jousted back and forth for thirty chapters. Now it’s time for Job’s summation.

This chapter is a long passage – forty verses – and the flow revolves around a repetitious theme … IF. Job makes his case with a series of hypothetical statements. If I have done this … If I have done that. He addresses the accusations of his friends in summary fashion and answers each accusation by declaring what punishment he would deserve if he was guilty.

Job begins the chapter by asserting “I made a covenant with my eyes.” His initial declaration speaks to his personal thought life. Job vowed to be pure and strive for integrity in his heart. As the chapter continues, he declares his upright behavior toward his neighbors, that he has walked the straight and narrow path without choosing falsehood or deceit as he interacted with those nearby. Then he speaks of his relationship with the community, his servants and/or people of lesser means with whom he’s come in contact. He declares he has always treated these individuals with respect and care.

In relation to wealth, Job says he has appreciated the material blessings he’s received but he’s never depended on those material goods for his security. Nor has he been enticed to worship objects in the sky because he understands how seriously that would offend his Creator. He reiterates his belief that he’s faithfully and scrupulously served the downtrodden, even when he could have turned away.

In verse 6 of this chapter, Job expresses his longing for God to weigh his life … because he knows God’s scales weigh accurately. Job calls again to God in verse 35 asking to be heard. Like a defense attorney, Job declares he’s set forth his case and the time has come for the “Almighty [to] answer me.”

The final three verses of the chapter are what I think of as Job’s Cross-My-Heart-And-Hope-To-Die statement. He has ended his summation and rested his case but he utters two final if statements. If the statements are true (if he has been found guilty of certain things), he pronounces the appropriate judgment for his behavior.

The passage ends with the definitive statement:  The words of Job are ended. 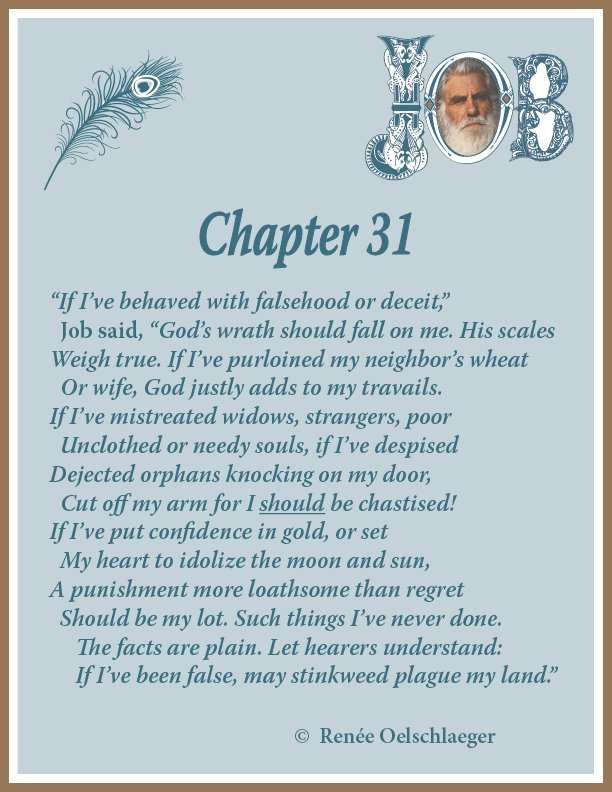