Arriving today at Chapter 32 in The Book of Job, the chapter brings an unexpected surprise … we’re introduced to a completely new character named Elihu. As he speaks, we learn he’s a younger man who has been listening to the extended conversations between Job and his comforters.

Although he hasn’t said a peep to this point, it’s fair to say Elihu has been chomping at the bit to enter into the conversation. As long as his elders were inclined to speak, he had deferred to them. The moment they fell silent, clearly ineffectual, Elihu takes the plunge.

He’s angry. His anger burns against Job because Job has been justifying himself before God. His anger also burns against the three comforters – Eliphaz the Temanite, Bildad the Shuhite and Zophar the Naamathite – because they’ve condemned Job and yet failed to prove the nature of Job’s apparent wickedness. Elihu is angry!

There are scholars who think the Elihu chapters of Job may have been appended later on. Their reasoning is based on his puzzling sudden appearance in the narrative and a slightly different style to Elihu’s speeches. Not being a scholar myself, I acknowledge the arguments but tend to think Elihu’s explanation carries its weight. For instance, in verse 4 the narrative says “Elihu had waited to speak to Job because they were years older than he.” As a younger man in that culture, he would have been trained to defer to his elders.

When Elihu actually speaks, he asserts his reluctance to speak … he was “shy and afraid to tell you what I think” (verse 6) because of his youth. He understood the value of listening to the wisdom of older men. Though Elihu is shy and afraid, he’s also brash. He boldly chides Job’s friends for their inability to properly frame their case against Job. Elihu implies these friends may not be as wise as he first thought.

Now that the others have settled into silence, Elihu begins to lay out his thoughts. He declares he won’t repeat the arguments already covered by Job’s comforters, but he also admits he is “full of words” (verse 18) and “about to burst” (verse 19) for having kept quiet until now.

There’s something refreshing about this new voice, but chapter 32 only provides a brief taste. Since this is just our introduction to Elihu, we see his impetuosity but whatever wisdom he provides will be revealed in the chapters to come. 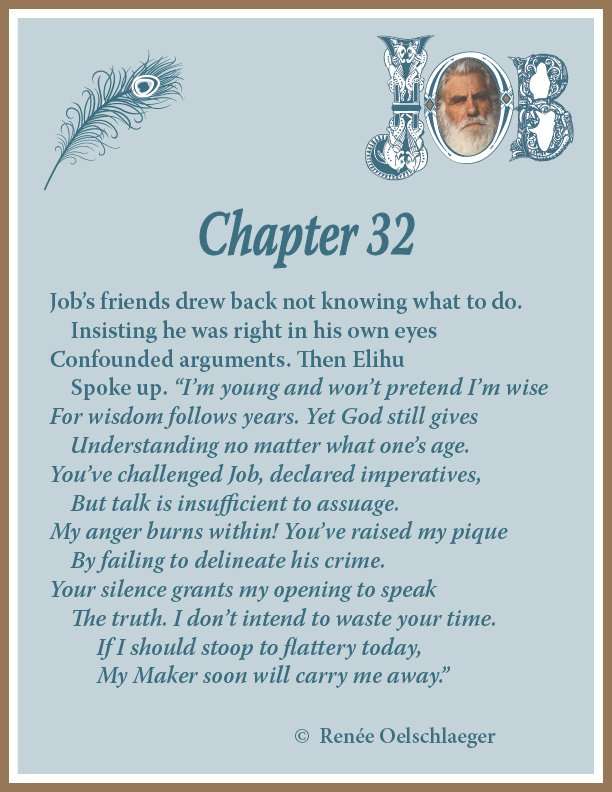 One thought on “Youth Speaks”