Gutsy Elihu, a younger man who has listened to Job and the three comforters who sit nearby, in Chapter 34 of The Book of Job continues his outspoken rebuttal of Job’s complaints against the Almighty. At the conclusion of Chapter 33, Elihu challenged Job to respond if he had anything reasonable to say, but Job remained silent so Elihu presses on. He’s not shy.

Elihu demands they – all four of the older men – listen to him. He then begins his rational argument with the example of testing food by touching it to your lips or listening to what someone says before deciding its veracity. He briefly repeats the complaints Job has made and suggests it’s time to test Job’s arguments to see if they hold weight.

But Elihu also charges Job with being arrogant … “Would anyone but Job say such things?” (verse 7) He notes Job’s thirst for insulting God is deeper than his thirst for water. He points out that Job’s bitterness is ample proof of his disregard for God.

Then Elihu expounds on the greatness and incontestable justice of God (verse 10 ff.). God doesn’t do wrong. He is perfectly just and always fair. Elihu accuses Job of expecting God to act according to human standards (Job’s false standards) when God is so much greater and more powerful than that.

The rest of the chapter continues on this theme as Elihu contrasts the temerity of Job against the goodness and righteousness of God. It’s an amazingly insightful recitation of the character of God. As the chapter draws to a close, Elihu calls on God to punish Job according to the standard Job has dictated because Elihu asserts that Job has exhibited rebellion and stated insulting arguments … just as any evil godless man would do.

Today’s sonnet follows this line of thought, reflecting the scathing – but honest – words of a young man who has seen through the veil of Job’s respectability and a young man who also understands the character of Almighty God. 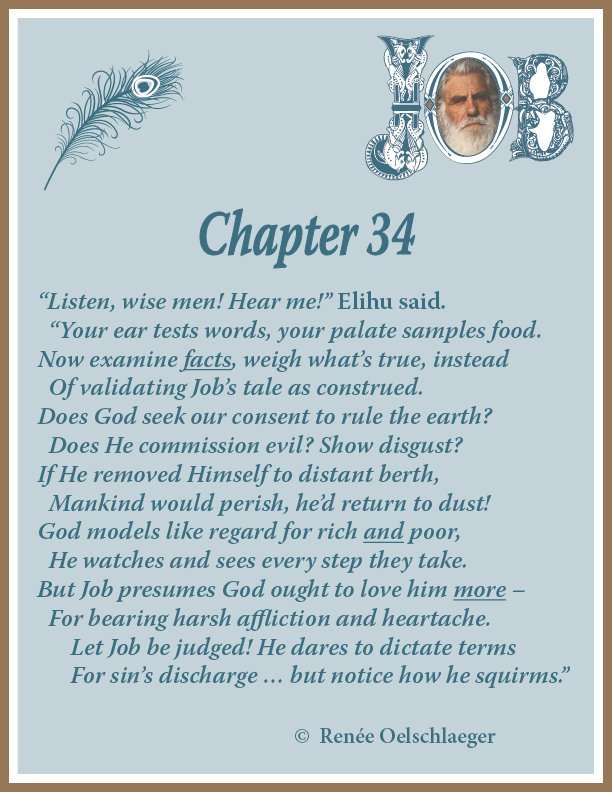 One thought on “Let Job Be Tried”