Last week, it was Behemoth. This week, there’s a new image as The Book of Job quickly draws to its close. This image is equally ominous and terrifying.

From Job chapter 40, the image of Behemoth is God’s first object lesson drawn from the natural world. As follow-up to that magnificent image, Job chapter 41 brings us to God’s discussion of a second created beast, Leviathan.

Given the marvelous descriptions God provides of both Behemoth and Leviathan, I’m fascinated! My imagination kicks into high gear as I search for a mental image that works. Truly, not one of the images evoked seems to fit. Is Behemoth nothing more than a giant hippo (as some suggest)? Is Leviathan simply an oversized crocodile (as others suggest)? 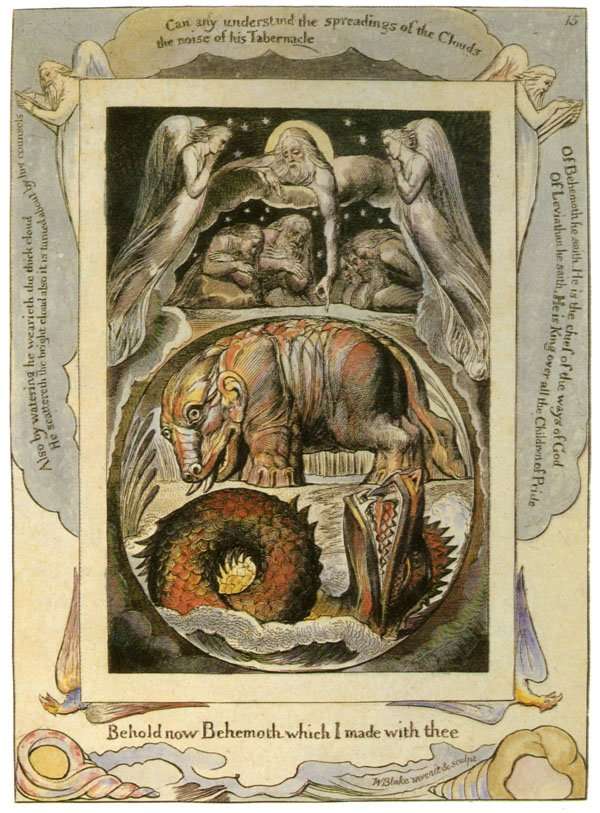 Judging by the image at left, Artist and Poet William Blake envisioned the two creatures with a literal eye. He painted creatures who are formidable, even hideous. His image forces us to conclude these creatures are not the cuddly sort.

By re-imagining both of these creatures through a modern lens, I think we’ve actually diminished their significance, blandly identifying them with the local zoo or sea world.

I’ve seen giant hippos at the zoo and watched them on television; though they are beastly, I don’t believe they fit the description of Behemoth reflected in Job chapter 40.

I’ve also watched crocodiles (zoo and television). I wouldn’t want to tangle with a croc (as the renowned Crocodile Hunter, Steve Irwin often did), but crocs – though terrifying and beastly – don’t fit (in my mind) the description of a genuine sea monster, a bonafide Leviathan.

Using Behemoth and Leviathan as object lessons in Job, God intended to communicate something about them in relation to Job (and by extension, to all mankind). What exactly was God’s point?

The short answer (as I understand the two chapters) was to provide context for Job. These creatures, made as Job was by the will and hand of the Creator, are (were) imposing wild beasts. A man like Job would be unable to control, train or domesticate either beast. By asking a succession of questions, God illustrates to Job the impossibility for Job to exercise his authority over these beasts.

The rational conclusion Job must draw – is forced to draw – is that only God, the all-powerful Creator of the Universe, has the ability to manage His Creation … and the only rational response for Job is to bend his knee to his Creator.

My first sonnet based on chapter 41 distills the first ten verses of the passage. How is it possible for Job to reel in Leviathan when this sea monster is equipped with numerous defensive body parts? This is almost a rhetorical question, because Job can only logically respond, it’s not possible. 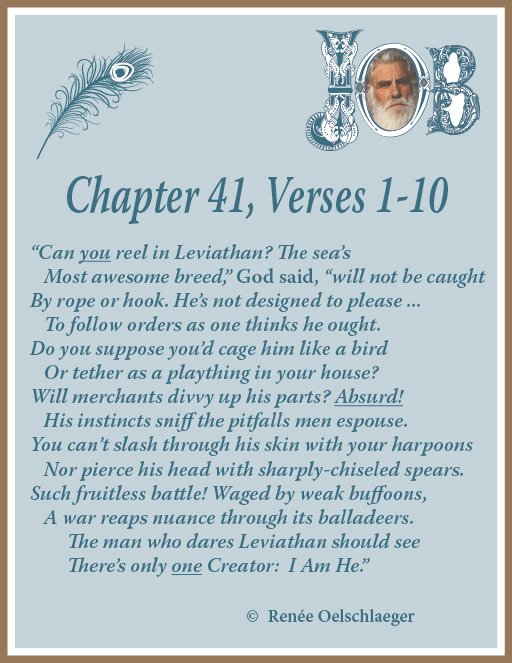 The second sonnet brings out details from the last twenty-four verses of the chapter. This is a delightful passage where God reminds Job (and anyone who studies The Book of Job) that the Creator owes no one! No One!! The Almighty is indebted to no man for anything … because all Creation belongs to Him.

In these verses, God develops the image of Leviathan with further descriptions of the monster’s size and strength, its dragon-like characteristics, its majesty that dwarfs the perception man has of himself. And yet, for all its impressive qualities, even Leviathan is a creature, necessarily obedient (in its way) to the Creator.

God’s implicit message to Job? So you should be, my servant Job. 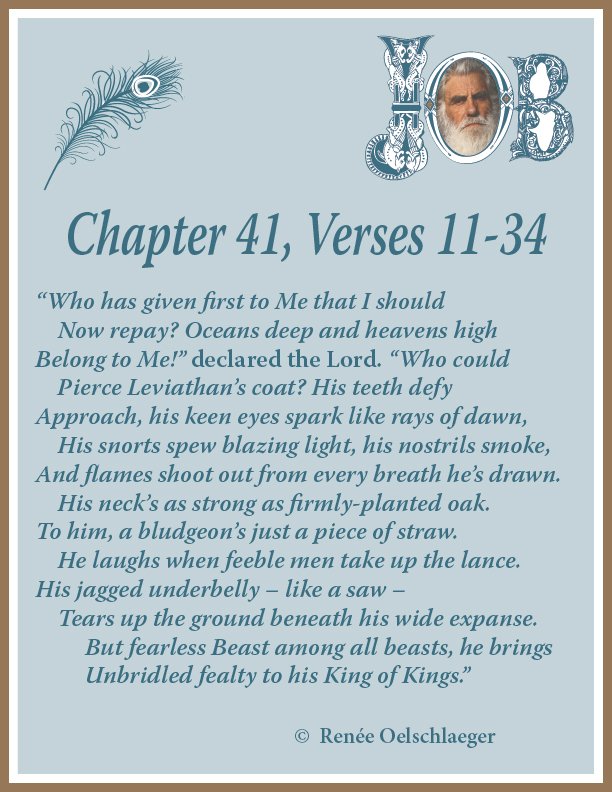 2 thoughts on “No One So Fierce”