As The Book of Job opens, the reader occupies a ring-side seat within earshot of a heavenly discussion between the Creator and one of His created beings, the deceiver Satan. This introductory conversation centers on a man whom God describes as “my servant Job.”

As the conversation between God and Satan progresses (through the first two chapters of Job), the account is told via prose. Starting in chapter three, however, the events of Job’s life (and suffering) are related through poetry. This epic poem carries us all the way through chapter forty-two, verse six … after which the narrative reverts once again to prose.

Though the poetic portion of the book concludes with Job’s confession (see last week’s post), the peerless radio personality Paul Harvey would have suggested we look at the rest of the story. Verses seven through nine of chapter 42 provide God’s frank evaluation of the “comfort” Job’s friends had offered.

In these three verses, once more we’re allowed to eavesdrop as God speaks directly to Eliphaz, the Temanite. (Do you remember him? Eliphaz initially shows up in chapter 4, the first of Job’s friends to speak, attempting to explain the root causes for Job’s awful suffering.)

When God addresses Eliphaz in chapter 42, verses seven through nine, there’s no thunder or lightning, no burning coals heaped on Eliphaz … none of the things we tend to associate with God’s wrath. God speaks clearly and concisely. He communicates His anger that Eliphaz and his friends had made false statements. In essence, God says, “Eliphaz, I’m furious and here’s the remedy. Follow my instructions or I’ll mete out the punishment you deserve.”

Having said that, God provided a specific, two-fold remedy for their folly:  they should bring bulls and rams (7 each) to Job for burnt offering sacrifices. Then they should entreat Job to pray for them.

There are several remarkable aspects in these three verses of scripture. As with chapter one, God uses the phrase “my servant Job,” repeating those words four times to reiterate His original assessment of Job (expressed in chapter one) as a “blameless and upright man.” By contrasting “my servant Job” with Eliphaz (plus his two cohorts Bildad and Zophar), God declares who should be commended and who should not.

Even before the burnt offerings were completed, God had already promised forgiveness. We also know the Lord (verse 9) “… accepted Job’s prayer.” Because Job prayed, God forgave the Temanite, the Shuhite and the Naamathite. In fact, God intimates the uniqueness of His relationship with “my servant Job.” Once Eliphaz and Bildad and Zophar have done (verse 9) “as the Lord told them,” we read this striking statement:  “… the Lord accepted Job’s prayer.”

Pictured below is my sonnet on this particular passage. I love the message of these verses that God gives grace to Eliphaz (and his fellow comforters) rather than meting out the punishment all three deserve. In this way, Job is a representation of Jesus Christ … Job prays for his friends and it is Job’s prayer that the Lord accepts. 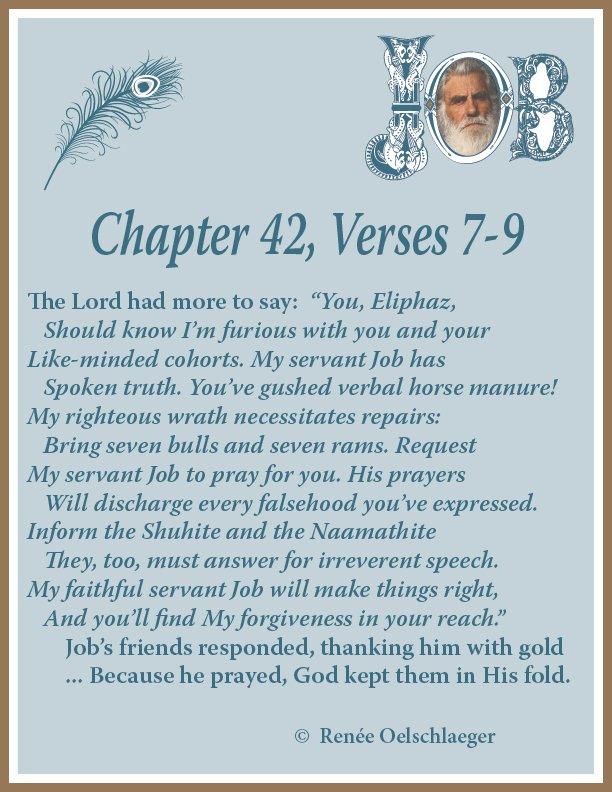 2 thoughts on “Forgiving The Comforters”