We’ve reached the last verses of the final chapter of The Book of Job. Through poetry and prose, readers have witnessed Job’s catastrophic losses and torments. We’ve also heard from Job’s comforters, offering their point of view on why Job deserved to suffer.

The book is divided into 42 chapters. In October 2014, I first posted about my plan to compose (and post) a sonnet for each chapter. In early posts, I pared my compositions in order to condense each chapter’s narrative into the sonnet format of fourteen lines.

With later chapters, I realized the richness of Job’s history required more latitude; fourteen lines could not do justice to certain chapters. So I expanded the plan. Including today’s final sonnet, I’ve composed a total of 49 sonnets on the book.

ASIDE: Some readers may recall I posted about my personal life goal (in July 2010) to compose 100 sonnets. That goal has been exceeded.

The history of Job ends with a brief summary of Job’s later life, after the Lord gave relief. Verses 10-11 provide basic points: (1) The Lord made Job successful again. (2) The Lord doubled Job’s material possessions. (3) Family and friends commiserated over Job’s earlier pain, and then shared a feast to honor him, showering him with gifts of silver and gold. 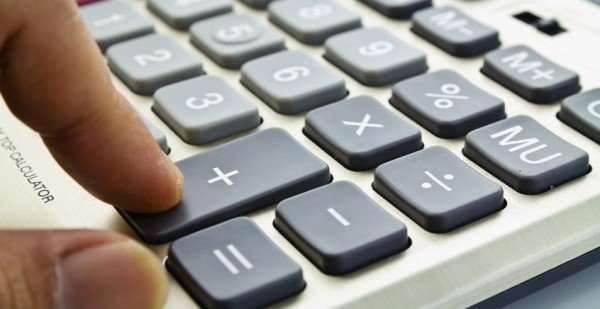 Verses 12-15 provide a quantifiable detail, a bookkeeper’s asset list tallying Job’s restored wealth, as well as his added blessing of ten more children. By noting the numbers of Job’s restored sheep, camels, oxen and female donkeys, the comparison to Job’s earlier wealth (Job 1:3) is clear. The narrator’s implicit message is:  Yes, Job’s initial wealth impressed, but now look at the size of his estate!

One fascinating aspect from these verses relates to the sons and daughters. Not one of Job’s seven sons is mentioned by name. In contrast, all three of Job’s daughters are listed! Their names convey significance. Jemima means “dove” (dove of peace), an allusion to Job’s miserable affliction and the peace he no longer takes for granted.

Keren-happuch means “horn of antimony.” A shiny chemical element, antimony in ancient times was used as an eye cosmetic to enhance a female’s natural beauty.

One source asserts that together, the names of Job’s daughters evoked peace, fragrance and beauty, each an outgrowth from Job’s long travail. I appreciate the symmetry of that suggestion.

Verse 15 also emphasizes these three women were known far and wide for their stunning beauty. Job so highly regards his daughters, he makes them co-heirs with their brothers … setting the standard for ancient egalitarianism by bequeathing his daughters equal shares in his restored (and vast) estate.

In wrapping up this sonnet/study, I’m struck about the way in which the book ends. Remember the first two chapters recorded a fascinating conversation taking place in the heavenly realm? The text is silent about subsequent conversations between God Almighty and the Deceiver.

We know Satan didn’t give up. He continues to torment and deceive mankind to this day. But did the Devil admit defeat in Job’s case? Did he storm out of God’s presence like a petulant child — manifesting the sound and fury of a hellacious hissy fit? The book doesn’t enlighten us.

Instead, these final verses center upon Job, listing God’s increased blessings for the man described in chapter 1, verse 1 as “blameless, upright, fearing God and turning away from evil.”

The Book of Job never states how old Job was at the beginning of his trials, but the final paragraph of the narrative (verse 16) declares he lived another 140 years, long enough to cherish four generations of his family.

One note about the sonnet below. The names of Job’s daughters presented a challenge. Though I could have created a sonnet sans their unusual names, my sense was the poem would seem incomplete. As a result, rhythm in the second quatrain is clunky and uneven — but consistent with the English text.

My study of Job concludes with this final sonnet. 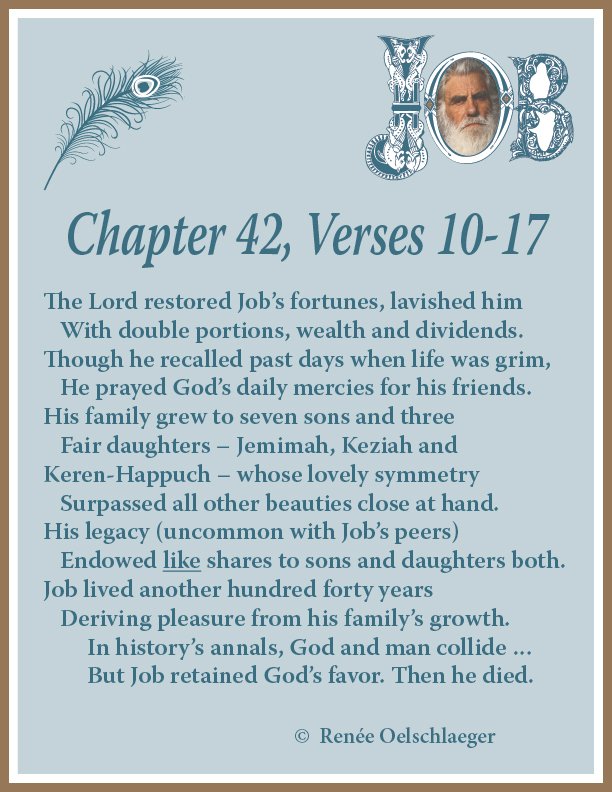 4 thoughts on “The Man From Uz”