Certainly, this man’s situation isn’t unique. Spouses die everyday. Furthermore, loneliness isn’t just an affliction suffered by surviving spouses. Still-married individuals also endure loneliness. Further, as with most experiences in the human condition, people respond differently to loneliness. Some people may easily “snap out of it,” while others may do self-harm and still others develop drinking or drug habits to ease the pain. In past generations, our elders might have advised keeping a stiff upper lip or urged us to look on the bright side.

I recall reading the words of poet Edna St. Vincent Millay who described loneliness this way:  “Where you used to be, there is a hole in the world, which I find myself constantly walking around in the daytime, and falling into at night. I miss you like hell.” Indeed, the image she describes is a pit of despair, and she points out nightfall is most excruciating for the pit devours in darkness.

According to one source, the incidence of loneliness (among people 45 and older) has doubled since 1980. As if a suffering individual needs help to measure his or her loneliness, there’s also a website quiz to make the determination. Apparently, if you score exceedingly high on their scale, you’ll be urged to seek professional and/or medical help. I won’t recite a handful of statistics here; read the sources for yourself if you’d like. Suffice it to say, when a person suffers from loneliness, information or statistics probably won’t lessen their pain.

I’ve mentioned my mother before. She’s lived more than 20 years since my daddy died. Throughout her life, she’s displayed self-reliance and independence. During the years she’s been a widow, she’s enjoyed the solitude and freedom of living alone. But now … in large part, I believe, because she’s lost the freedom to come and go on her own and because her eyesight has diminished her view of the world, she’s experiencing loneliness. (She may have experienced it before, but now she’s willing to admit it.) There’s a difference (in my view) between loneliness and solitude. For Mom, the same solitude she long enjoyed has morphed into disconcerting aloneness. 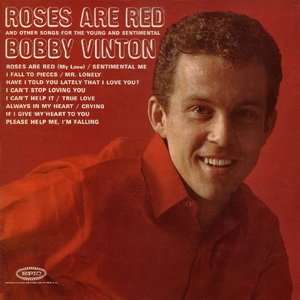 Eighty-one year old Joan Rivers recently died. In her memoir, the late comedienne is said to have made a wish-list for her funeral. In part, she wrote:  I want Bobby Vinton to pick up my head and sing ‘Mr. Lonely.’

Vinton (at age 79, a contemporary of Rivers) is a musician whose career has spanned six decades. When I was a teenager, his 1962 album, Roses Are Red, was the first pop album (not a 45 record) I ever owned.

I think Rivers was being both serious and humorous (as was her way apparently, based on all I’ve read). She and Vinton were close friends who spent time together appearing in Las Vegas shows. The choice of Mr. Lonely, one of Vinton’s standard and much-loved tunes, was no doubt a tune Rivers enjoyed hearing him sing, but just as likely, it was also a concession to the loneliness she experienced during her lifetime. She obviously used humor to lessen the pain of her loneliness.

Acknowledging loneliness (or finding ways to cope) may not reduce our suffering from it in this world. In my view, all of us were designed and created to live in precious community with both our Creator as well as the people around us.

But to me, the hole in the world which explains our human experience with loneliness also makes a compelling case that “… we have not always been or will not always be purely temporal creatures … we were created for eternity.” (This concept is shared in a letter from C. S. Lewis written to author Sheldon Vanauken and recounted in A Severe Mercy.)

As Vanauken asserts:  “… eternity exists and is our home.” Amen.

2 thoughts on “A Hole In The World”