After the most recent shooting at Fort Hood, Texas, one of the base soldiers told of his experience being barricaded behind a door with fourteen others as the rampaging shooter attempted to enter this space to continue his violence. In that room, First Lt. Patrick Cook feared for his life and also the lives of others hunkered down with him.

One soldier bravely placed himself at the door to block the shooter’s access; though this soldier was mortally wounded, his effort prevented the shooter from entering. Cook says: “This Soldier’s name was Sergeant First Class Daniel Ferguson, and his sacrifice loaned me the rest of my life to tell this story.”

Sergeant Ferguson’s selfless act models the love spoken of in John 15:13:  “Greater love has no one than this, that one lay down his life for his friends.”

Think about someone dying in your place. How do you think you’d feel?

It’s an act of uncommon courage, laying down one’s life for a friend. I know such an act boggles my mind. I think of myself as the one who would probably cower in a corner (hiding from an assailant), the one who will likely claw my way off my deathbed because I’m ready to die but not today. In theory, I’d like to say I’d lay down my life for a friend, but in actuality? I’m not that bold.

In Romans 5, Paul makes the argument that for a righteous man − and maybe even for an ordinarily good man − one might sacrifice one’s life, but such self-sacrifice is remarkable. Paul contrasts the unusual act of self-sacrifice (in verse 8) to God proving “His own love toward us, in that while we were yet sinners, Christ died for us.”

Today marks the beginning of what many people know as Holy Week, a period recounted in each of the Gospels during which Jesus Christ entered Jerusalem and prepared to die.

The crowds were jubilant as they welcomed Jesus into the city! He rode on a donkey colt and the throng threw down palm branches and their cloaks into the dusty street to honor Jesus. (One of the religious leaders considered this display embarrassing, showy, inappropriate to honor a lowly Nazarene.) Hosanna! Hosanna! they shouted. Blessed is the king who comes in the name of the Lord! Jesus didn’t discourage their celebration. He told the religious leader if the people became silent, even the “stones will cry out.”

The masses had seen and heard about Jesus performing miracles − turning water into wine, raising Lazarus from the dead, healing sick people (a leper, the lame, crippled, blind, mute). A king they wanted and Jesus surely had the dynamism to draw these crowds for what they hoped was a reset from the Roman rule under which they’d suffered. Read the details here. The crowds shouted a different message once they realized Jesus had come not to overthrow the Romans, but to die.

Because Sergeant Ferguson died on his behalf, First Lt. Cook maintains his life is now on loan. Who among us would actually be willing to die for a friend … even a very good one, a person whose character qualities were impeccable and worthy of admiration? Which of us would step forward (as Ferguson did) to take his or her place?

An ancient poem written and translated many times and by many authors is O Sacred Head, Now Wounded. Once attributed to Bernard of Clairvaux, some think it’s the work of another writer. One particular verse says: Mine, mine was the transgression, but thine the deadly pain … a Friend dying in another’s place, a life now on loan. The verse reproduced below also references the impact of knowing one’s life is on loan. 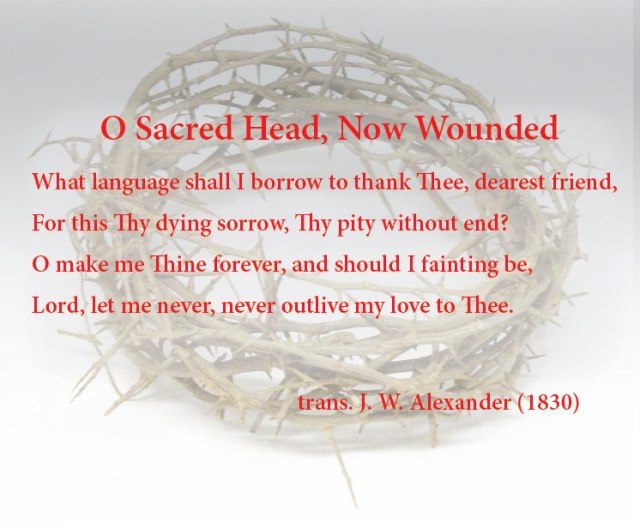 First Lt. Cook’s perspective parallels my own; in considering Holy Week, I’ve experienced the sacrifice of a Friend, Jesus, dying in my place. How about you?

One thought on “A Life On Loan”