The movie presents an interesting dilemma. With the tag line “Finally … a man is listening” giving voice to the almost universal longing of women to have the listening ears of their men, it’s understandable this film was generally well received. Flip that scenario around and Gibson experiences why there are hazards in hearing a woman’s unfiltered innermost thoughts.

At the time of the film’s release, it tapped into a widespread angst … women wishing to be heard as well as men trying to understand what exactly it was women wanted (from them). This is the men are from Mars / women from Venus centuries-old puzzlement. A Google search for the phrase “what women want” yields nearly 523 million hits. This is clearly a question about which people want answers!

Rotten Tomatoes judged the romantic-comedy a “rather conventional, fluffy comedy-romance that doesn’t make good use of its premise” but I think if the movie were released in 2015, it would tap into an identical unease. Simply put, nothing’s really changed in fifteen years … nor in the last century.

Let’s face it, communication between the sexes is not an easy task! I’m not conversant on the technicalities, but I’ve long known my Beloved doesn’t always have his ear tuned for my higher-pitched voice. (Actually, this is also true of the dog who responds to my voice with a quizzical look, yet remains noncompliant to my commands. When my Beloved gives the same instruction, the dog obeys immediately!)

Communication can also be comical because – speaking mostly for myself here – women don’t always know their own minds. (Ladies, may I have an amen on this?) I recall being told early in my life:  “It’s a woman’s prerogative to change her mind.” Before we can change our minds though, we need to have a firm position from which to change! Further, some of us are just contrary and determined to take an opposing view no matter what. (Does that sound like the voice of experience?)

The sonnet below is partly from personal experience. My Beloved and I attended the same university, so the early days of our relationship were spent at meal-times in the cafeteria or during classes in which we were both enrolled as well as study times at the library when we “accidentally on purpose” bumped into each other.

Yes, there were a couple official dates, but I still recall my frustration that he seemed clueless to what I wanted (being romanced with dinners out, receiving flowers and other tokens of affection). Mostly, I wanted to know – with certainty – that I was significant and important to him. I didn’t want to invest my heart unless he was prepared to do the same.

In this poem, those memories and conversations I’ve had with friends show the complexities of Mars and Venus interactions. Love is a perilous and delightful adventure, isn’t it?! 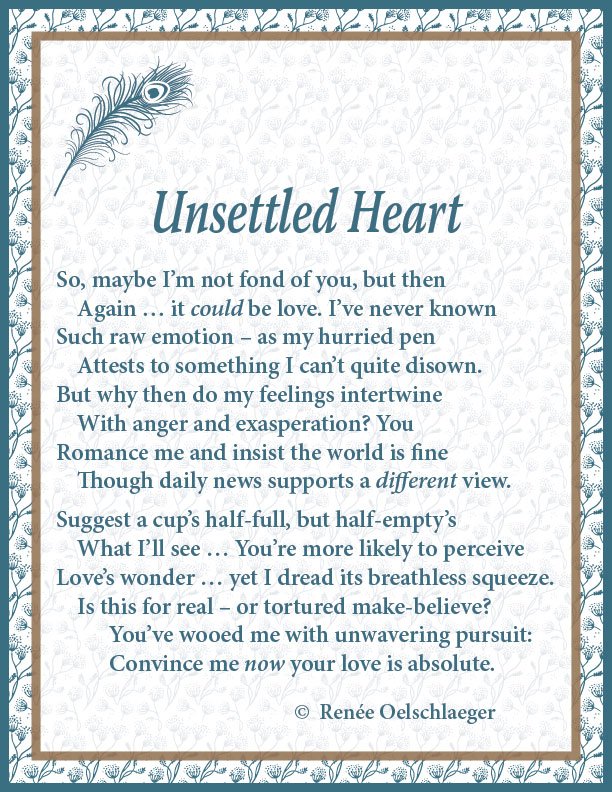 2 thoughts on “A Man Who Listens”