Wrongfully accused … even for young children, this is an easily-understood expression. The concept of fairness seems inborn and children learn at an early age the power of a complaint “It’s not fair!” Job wasn’t a child, but he understood how it felt to be wrongfully accused.

In studying The Book of Job, I’ve begun to understand how awful it is to be perceived as a wrongdoer … when you’re not! Every time Job proclaimed his innocence, his friends shook their heads and presumed Job was guilty and deserving of judgment. The “circumstantial evidence” confirmed their hasty judgment. Case closed!

By reading the first couple chapters of Job, we know the “evidence” was woefully incomplete and didn’t warrant haste (or even judgment) from Job’s three , er, , er, faultfinders. In Job Chapter 19, Job responds to Bildad (whose railings comprise the previous chapter), and Job senses the futility of his situation. No matter what he tells them, his friends refuse to consider any other possibility (except sin) to account for Job’s suffering.

Unlike today, Job had no organization like The Innocence Project to advocate on his behalf. (Over the last couple decades, this non-profit group has taken up the challenge of actual cases where individuals have been wrongfully accused and convicted.) All Job had was his integrity … and three friends who pretended to comfort him, all the while serving as his interrogators and critics! 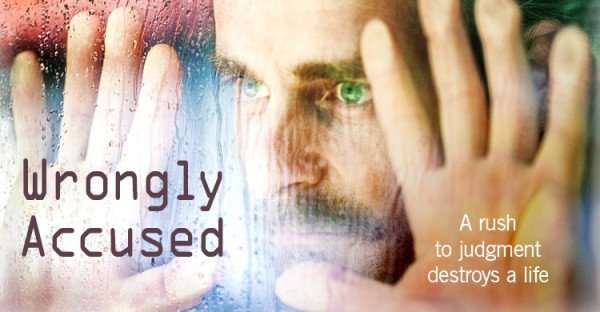 I have to admit, the words of Job 19:6 were difficult for me to process. Four words:  “God has wronged me.” (Does that sound like blasphemy to you? But God didn’t strike Job dead on the spot.) Other versions translate the passage with words like “God has overthrown me” or “God did this” but for me, the impact of those four words isn’t minimized! “God has wronged me.” Simple statement, not to be glossed over.

Perhaps that’s the ultimate beauty in this passage (for me anyway). Here’s the God of the universe who has been wrongfully accused. And here’s Job, by all accounts a man whose life has been above reproach, and he is wrongfully accusing the Almighty of wronging him! And then there’s Satan, the liar and accuser, who should receive all the blame for setting this scenario in motion … yet he skates, no blame, not even a mention.

Job’s statement isn’t blasphemy at all; it’s an accurate reflection of his agony. Like bullets bouncing off Superman, Job’s words or perceptions won’t wound the Creator … He is God! Best of all, beneath Job’s agony and seemingly endless struggle, the chapter closes out with Job acknowledging “I know that my Redeemer lives.” He’s buoyed with confidence that God will vindicate him. He knows (as verse 26 asserts) “I shall see God.”

In the last two verses of the chapter (28 and 29), Job issues a warning to his friends. While that warning is important (especially given Zophar’s hostile response in chapter 20), the sonnet below omits mention of the warning because I believe the hope to which Job referred was by far the more important part of the chapter.

One thought on “A Paleo-Innocence Project”