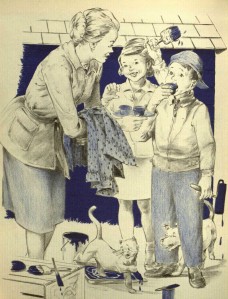 From the time I reached young adulthood, I recall the general attitude towards being a homemaker had taken on a decidedly negative connotation. Women who performed homemaking tasks were consigned to brainlessness. Refer to someone as a homemaker and in return you’d receive an almost-weaponized look of scorn. (The scornful look communicated volumes. You like nails on a chalkboard?)

Women in the 1970s had begun moving in huge numbers into the “gainful employment” category. This transition meant women (who were already tending to household tasks, nurturing children, preparing meals and managing financial affairs) now had another job to do! Given the limited number of hours in a day, ordinary duties of homemaking were either left undone or hired out for others to complete.

It’s interesting to read the list of 30-plus items Wikipedia includes as “usual things” a homemaker does. It’s a good list, but the usual things would vary within each household. In my re-blog post earlier today, I pointed you to the blog of a fine homemaker whose To Do list includes but exceeds the items Wikipedia mentions. As with a good number of her peers today, this homemaker (full disclosure, she’s my younger daughter) runs an in-home business and also home-educates her children.

When my children came along, I chose to be a stay-at-home mom. (Read some other posts that relate, here and here.) But that doesn’t mean I rose from bed every morning eager for another round of mopping the floors, cleaning toilets and washing windows. In fact, I’m a hit-and-miss housekeeper. (The dust is always going to come back, right?!) Still, a measure of order in my small universe is important to me, so housekeeping tasks can’t be totally ignored.

Many years ago, I got to thinking about homemaking and my approach to it. (And what should come out of my cogitations but another poem! Bet you’re surprised, huh?)

I was reminded back then of what Jesus promised his disciples in John 14:1-6. He tells them he’s going to go away. This is before the crucifixion and he wants them to understand that even though he’ll be gone, he is coming back for them.

The task set before Jesus (i.e. dying on the cross) was one aspect of preparing a future home. I don’t think it’s too big of a stretch to suppose the preparation to which Jesus refers in the passage is homemaking. He says “I’m going to prepare a place for you.”

I wrote the poem below after considering the model Jesus provided for me as a homemaker. Some tasks are simple drudgery. Others are overwhelmingly unpleasant. But when the goal is a peaceful and happy, well-ordered home, the reward goes beyond clean floors and freshly-laundered clothing. In its own way, it is subtly redemptive.

One thought on “A Place Called Home”