As someone who has watched the film multiple times, I found the VF feature enlightening. Never having delved any deeper into details about the film, I didn’t know Plummer’s antipathy for the film was so ingrained. Watching him on the screen in that film, I always assumed his general aloofness was the result of a director’s instructions for him to play the part that way. Reading the VF piece, I see now it was actually a reflection of Plummer’s overall distaste for the project!

I liked Plummer as Captain Von Trapp, though his character seemed slightly uneven. First he’s in love with the glamorous baroness (who is herself aloof) and then he realizes he’s fallen in love with Maria … and that realization completely changes his character? Maybe the changes seemed less credible because of the compression of time, but I’ve always found his presentation slightly disappointing.

Over the weekend, I viewed another film that also starred Plummer. This one, the 2014 film Elsa & Fred, is sappy and sentimental, but a bit zany and tender as well.

Plummer stars as Fred, a crotchety widower in his eighties who has been moved into a New Orleans apartment so his daughter (who lives nearby) can keep her eyes on him. Fred’s next door neighbor, played delightfully by Shirley MacLaine (Elsa), also lives alone and her endearing personality overflows as she inserts herself into Fred’s life.

What I enjoyed about this film was its winsomeness. Even though the characters were stereotypical and fairly ordinary, Plummer and MacLaine created a lovely and believable chemistry. The vibrancy with which they played senior adults – not quite ready to cash in their chips but not wholly sure what to do with the rest of their lives – gave the film poignant currency.

The film did not do well with critics. Rotten Tomatoes gave it a 24% rating though audiences more than doubled that rating. The Roger Ebert critic (Odie Henderson) was even less effusive! Henderson describes the Elsa part as “a compulsive liar” and “incredibly unlikeable.” I disagree … and since I’m not a huge Shirley MacLaine fan, I think my disagreement is based objectively. I saw Elsa as imaginative and charming, a woman whose playfulness is mostly innocuous but sometimes gets her in trouble anyway.

Personally, I wouldn’t have described the film as a “romantic comedy” even though it has moments both romantic and comedic. For me, this was a slice of life glimpse at the intersection of two lives. I guess that probably doesn’t fit well into defining the film’s target demographic, does it? 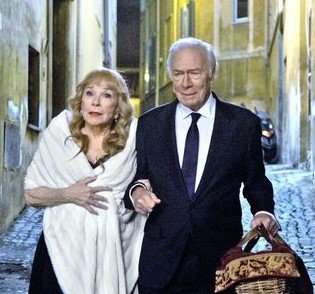 MacLaine was the perfect zany woman for the part of Elsa, especially given the fantasies to which Elsa was prone. There were magical moments due to the energy with which MacLaine played her part. Further, in the climax scene (I don’t want to ruin it for you), MacLaine takes a calculated risk in playing the part as it should be played. (I think you’ll understand exactly what I mean if you watch the film. This is Hollywood, where a female’s physical appearance can make or break her future career.) I admire MacLaine for making her character real.

Elsa & Fred is a touching tale about two people determined to make the most of the time they have left on this earth. There’s no glossing over the fact their lives are winding down, but they find enjoyment in their togetherness and the recognition they’re not dead yet! If you haven’t seen it, I recommend it. (If you have seen it, what did you think?)

2 thoughts on “A Tale of Elsa and Fred”