Given the founding of the private corporation SpaceX in 2002, an organization whose stated mission is “to enable the colonization of Mars,” space travel to Mars has taken on early 21st-century currency. In May 2020, SpaceX was the first private company (i.e. non-governmental) to send humans to the International Space Station.

I grew up during the 50s and 60s when television programs depicting space travel were clunky and contrived. Commando Cody, Space Patrol and Buck Rogers come to mind.

In later years before I left home, there was a family-focused series and a film featuring adventures of the Robinson family, Lost In Space, inspired by an 1812 novel, The Swiss Family Robinson.   By my recollection, the costumes were better, stage sets slightly improved (over earlier space travel productions) and the robots were as silly as ever.

The idea of space travel continued to capture the imagination. Remember 2001:  A Space Odyssey? The film was released in 1968, based on a story by science-fiction writer Arthur C. Clarke. Back in 1968, the year 2001 seemed so far off! As an example of artificial intelligence, the HAL 9000

(the spaceship’s computer) wasn’t a huge improvement over the robots from Lost In Space, but he was less silly. That was before HAL became malevolent … as the story proceeds, we understand HAL has been previously coded with specific instructions requiring HAL to murder the ship’s crew!

In Out Of The Silent Planet, C. S. Lewis presents his 1938 vision of Malacandra (Mars) as the first part of his space trilogy. The trilogy came about as the result of an agreement between Lewis and his friend J.R.R. Tolkien; Lewis would write about space travel and Tolkien would write a tale of time travel. Only Lewis completed his half of the bargain.

Space travel (in my view) will always fascinate. The select few who have walked on the surface of the Moon (12, to date) have been privileged to the amazing perspective of viewing our planet from afar! I can’t imagine how awesome that experience would be!

In the days following World War II, the United States initiated an act of economic recovery for Western Europe. It was called the Marshall Plan and rebuilt areas of Europe devastated by the war. In keeping with today’s extended interest in space travel to Mars, I’ve developed my own MARShall Plan. In the form of a sonnet, my tongue-in-cheek proposal suggests how one (me?) might achieve a journey designed to take me out of this world! 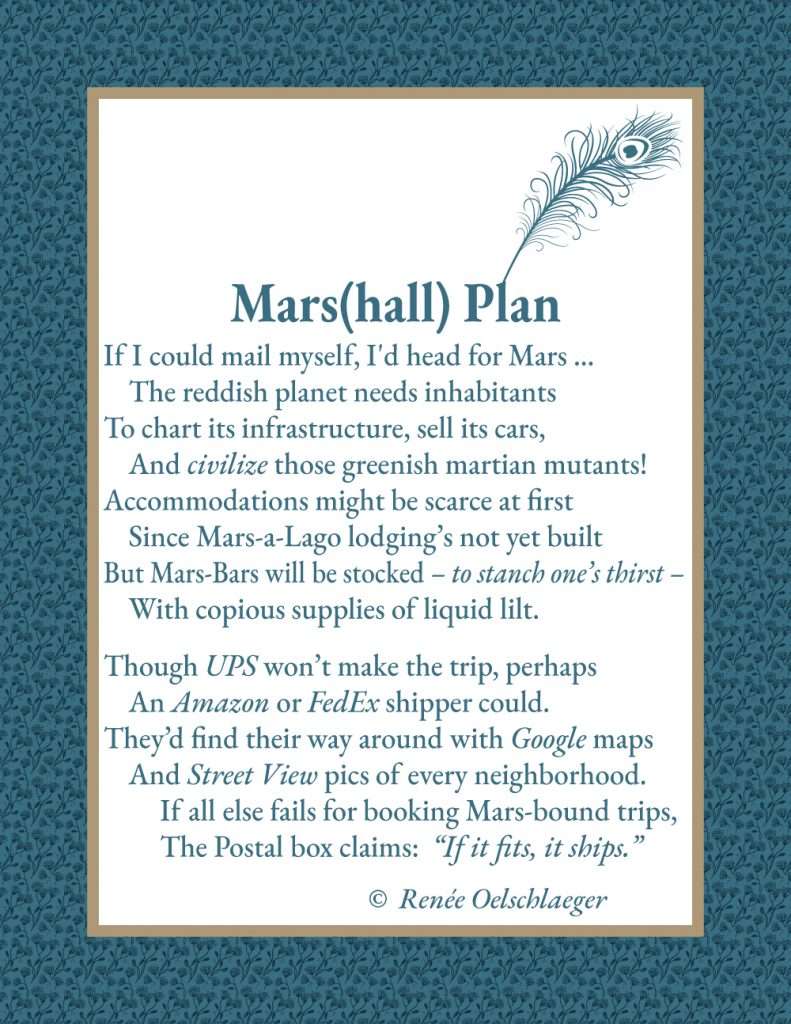 Cue the theme from Star Trek … “to boldly go where no man has gone before.” This is where the US Postal Service definitely earns its stripes! Who’s with me?