Thinking this week about the death of 2004 Pulitzer Prize winning poet Franz Wright, I couldn’t help but wonder about the ways in which he was depicted through numerous obituaries. He was “troubled,” he endured many “dark years,” a man who was “celebrated and tormented,” he suffered “clinical depression” and eventually “became addicted to drugs and alcohol.” These descriptions don’t paint an encouraging picture!

Wright holds a unique position in the world of poetry. He was the son of another poet who also won the Pulitzer Prize for poetry! Not surprisingly, the elder Wright (James) has also been described as a tormented individual. James was awarded the Pulitzer Prize in poetry in 1972.

Given the pattern of these two men’s lives (as well as other poets whom I’ve studied), I have often asked myself why anyone would aspire to be a poet, to choose a life the elder Wright characterized as hell. I tend to answer my own questions on the subject:  I know we’re driven to engage in certain endeavors not because we wish to endure the torment, but rather because we can’t not do them! When a person is truly a poet, doing anything else causes even greater torment.

The sonnet below came about as I reflected on my own life and experiences … which contrasts markedly to the experience of both James Wright and Franz Wright. Certainly, I’m grateful to have lived a life sans torment and deep emotional pain … but I do hope no one asks me for my poet’s credentials! Maybe a driver’s license would do? 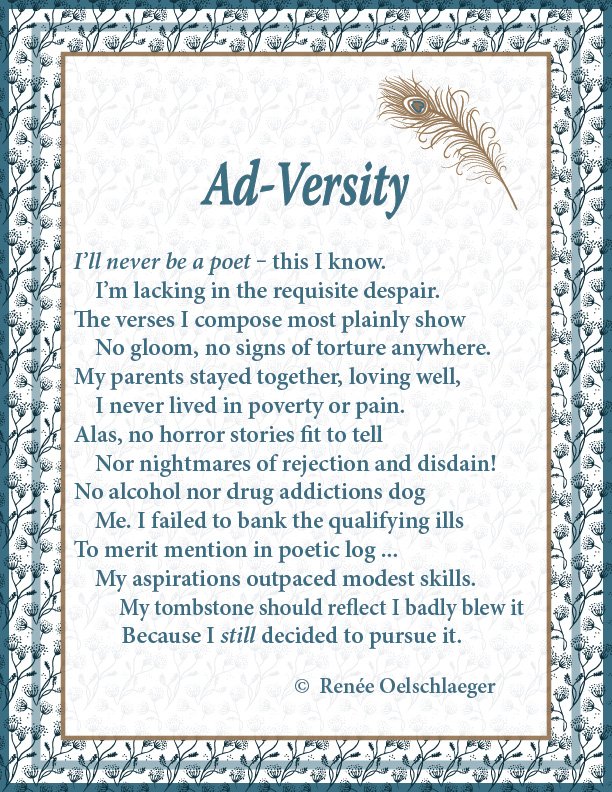