We’re celebrating today! Our grandson, with freshly-minted college degree in hand, has nailed down a job at long last. Four years ago, I posted about his enrollment in college and earlier this spring, I added another post to applaud his college graduation. All of us are so proud of his achievements thus far … and his tenacity in the job hunt.

It hasn’t been easy. Anyone who’s looked for a job over the last couple years knows how frustrating it can be. While accurate, meaningful numbers are hard to find, the Economic Research website of Federal Reserve Bank of St. Louis is a helpful resource for putting things into perspective. According to one chart, 59% of the working age population is currently employed … which means a whopping 41% are not. That in itself is troubling, but consider:  these numbers have stayed relatively constant since December 2009! Is it difficult to find a job? Yes, it is.

During our grandson’s job search, I realized just how many things have changed, things that complicate an earnest search for employment. Once upon a time (l-o-n-g time ago), I worked in the Personnel Department of an insurance company’s national headquarters. They called it Personnel then – which proves how long ago it was! Today, it’s Human Resources or simply HR. But that’s far from the only difference in the hiring-firing field!

First of all, it seems as though the majority of companies have set up their application process online. Depending upon the company, this may mean an applicant is permitted to upload (as part of the process) his or her resumé, but often, resumés are even more superfluous than they used to be. Today, an applicant enters standard data into a website app and hits SUBMIT. After that, it’s much like staring into a dark hole (or a trash can?). Some employers confirm receipt by sending an email but others don’t. Secondly, having the application process handled through an online portal means the applicant may or may not have opportunity to sit across the table from an interviewer. How does a stellar applicant differentiate him or herself from the pack when he or she doesn’t get a single chance to make a first impression?

I sympathize with job-seekers today. During the years I worked in Personnel, applicants walked through the door, received and then filled out a short application. When the app was complete, an interviewer reviewed the form and briefly interviewed the job-seeker. Sometimes the procedure was over in about 20 minutes. Sometimes the interviewer was out of the office and an applicant had to wait in the outer office. People in my department were able to discern a good bit about applicants just by watching them wait.

No more though. The invisible line of cyberspace thoroughly sanitizes any interaction between potential employees and non-committal employers, much more effectively than taking 30 seconds to glance at a resumé before dropping it into the round file. 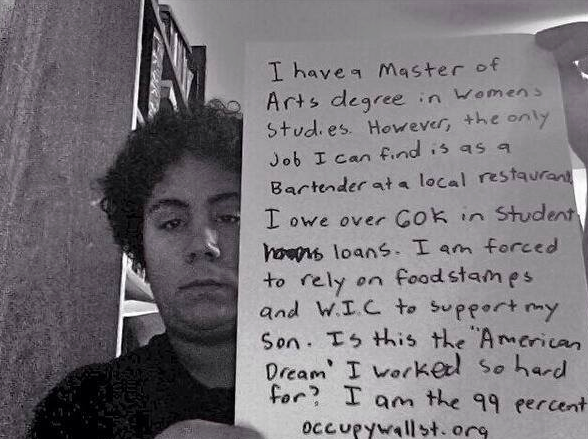 So yes, I have a measure of sympathy for today’s job-seekers. However, after viewing this image (at right) on FaceBook today, I must admit I’m more amused than sympathetic. The comments below this picture pointed out the obvious … why not seek a degree (and especially an advanced degree) in a field where the jobs are? Just one simple step might have improved the odds for this individual!

For instance, when my daughter was preparing for college, she made a concerted effort to identify fields where she could excel as well as use her degree in several possible venues. She chose Chemical Engineering. (If she’d chosen Fashion Design, something she loved, she’d have entered a field that was already flooded with aspiring designers.)

Certainly I’m not heartless and I hope the pictured individual will eventually find paid work (or seek to make better tips at her bartender gig). But honestly, an M.A. in Women’s Studies? Did she think before entering this course of study? (I don’t just blame her. I question whatever college she attended for perpetuating the myth that she’d be employable with such a specialized and navel-gazing program!)

She asks:  Is this the American Dream I worked so hard for? (I’m not going to critique her sentence structure. Too easy.) I’d first want to disabuse her of the idea that a college degree warrants she’s employable. Secondly, I’d want to tell her the American Dream (as I understand it) doesn’t warrant anything except a myriad of potential opportunities. The American Dream is a blank slate where individuals can choose to create something … over time. Generally, people who epitomize the American Dream don’t see it happen overnight; it takes years of hard work and consistency! (Writing one’s complaint on a piece of poster board and then posting a selfie all over social media isn’t the hard work to which I’m referring!)

I don’t believe the American Dream has died though I think it may be harder today and there are many who misunderstand its scope. While my grandson doesn’t have $60,000 in student loans, he has more than he’d like. He’s already talking about how he’ll get it paid down as quickly as possible (instead of taking the full 10 years they allow). He’s not going to be wealthy in the next several years, but he’s envisioning the promise of the American Dream in his life. He’ll achieve it … by working his tail off, advancing as each opportunity presents itself, and erasing his student loan debt as rapidly as possible.

That will be – to borrow a phrase from the above poster –  “the American Dream [he will have] worked so hard for!”