People who have read this blog over the last couple years will be aware of my love for genealogy. For one sample, I posted here about my Philadelphia forebears, a family with the surname West. The West Family is my 88-year-old mother’s line and she is the last known person from her clan. With the common name of West, doing research to locate other family members who might be distantly related to her has always been a challenge. 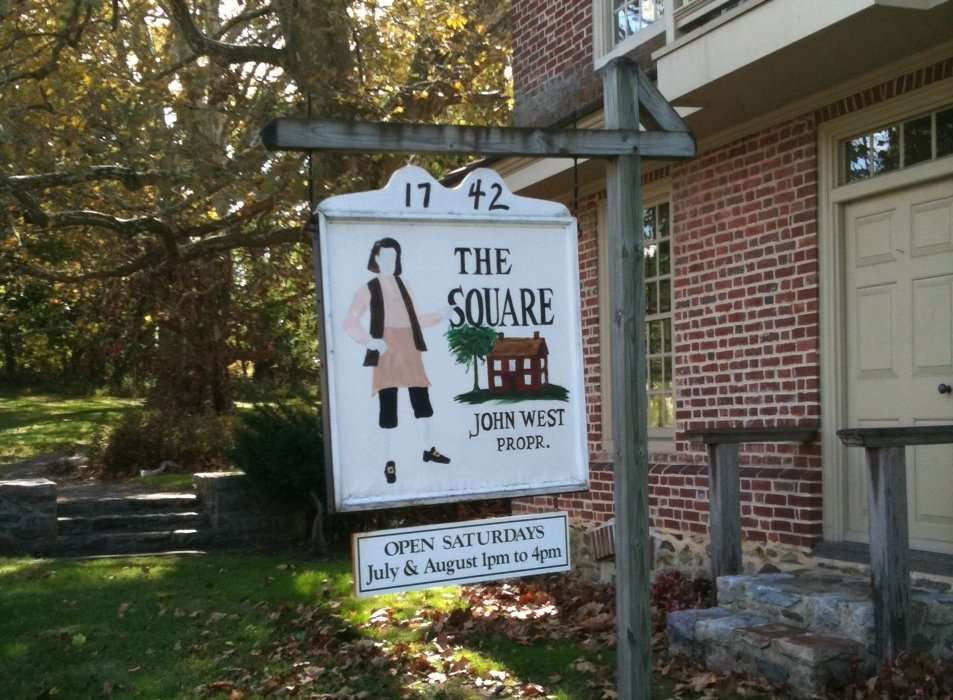 The last time I was in Philadelphia (doing family history research), I snapped the above picture. My mom and I had driven out to Newtown where she’d lived during her years in boarding school. There’s a historic marker on one of the main roads through town drawing attention to this historic site. An innkeeper named John West owned a tavern there in 1742.

John West was the father of painter Benjamin West who was born on this day in 1738. Little Benjamin would have been about four years old when his father owned this tavern … in the same town where my mother, almost two hundred years later, began her education not a mile from this landmark.

What could be simpler, right?

So far though, I’ve been unable to nail down any connection between either one of these historic figures and the West members of my mother’s family. Further, though this happy circumstance and mystery-solved would delight me if it were confirmed, I’m unwilling to draw any conclusions without compelling evidence. Such evidence, so far, has evaded me.

Nevertheless, partly because of his last name, I’ve always felt an affinity to Benjamin West … and I commemorate his birthday. His story is an amazing one, for by the age of seven or so, he was already showing remarkable artistic ability. By the time he was a teenager, he had studied informally in both Philadelphia and New York City. (Remember, this was the mid-1700s!) When he took up residence in London in the 1760s, he became known as the American Raphael. Interestingly, during the years preceding the Revolutionary War, West became the official painter for King George III. 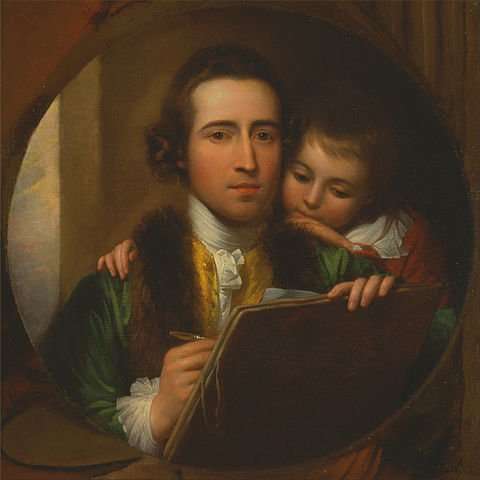 The striking picture at left is a delightful self-portrait of West with his younger son Raphael. I find this portrait heartwarming, and although it’s not a style that suits my home decor, I’d love to hang it in a prominent place somewhere in my home!

I could say the same for many of West’s other paintings. From the time I was very young, I always appreciated beautiful art. My older brother developed his own visual art ability and was quite good with painting … because of his ability, I just assumed he was the painter in the family and I’d have to develop my talent elsewhere. Though I chose music and loved it, I’ve often regretted that I didn’t also learn painting. (Maybe someday I’ll give it a whirl.)

Wikipedia offers a handful of paintings for view on the Benjamin West page. Perhaps one of the most memorable paintings (for me anyway) is Benjamin Franklin Drawing Electricity from the Sky, a painting done in 1816, towards the end of West’s life.

Whether or not I’m able to unearth a familial connection between my mother’s family and this talented artist from America’s historic past, I honor the man today for the beautiful works of art he created. Happy 276th Birthday to my potential family member, Benjamin West!