Posting Monday about the death of Elisabeth Elliot, I used a couple pictures of her … one was a familiar publicity photo and the other was a pen-and-ink sketch used on her website. In the World Magazine tribute noting Elliot’s death, they used the photo below. A follow-up post noted that some readers of World had expressed their dismay, wishing instead that the magazine had attached a more flattering picture, an image reflecting her youth and beauty. 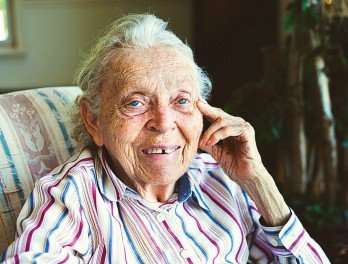 In response to its readers, World posted another photo of Elliot in her youth alongside the more current photo. World writer Mickey McLean titled his piece “Old and beautiful,” noting her “smile and twinkling blue eyes” reflected her “joy of living as a child of God.” I am in complete agreement!

Does anyone doubt we live in a culture obsessed with youth? Sociologist Stephen Katz (quoted in a 2014 post at Maclean’s) observed “People are so busy denying and defying age, we’re unprepared for what old age actually looks like.” Indeed, that seems to be the sentiment of those who prefer to see a young and beautiful Elisabeth Elliot rather than the aging saint. 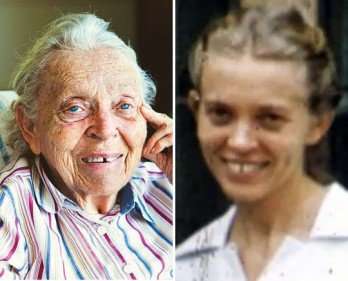 Yes, at 88 years of age, Elliot was “old.” Complicating her years, she had suffered dementia for about ten years. But the joyful smile does not appear to have diminished one iota from her 1950s photo.

A 2009 Pew Research Center study entitled Growing Old in America: Expectations vs. Reality queried almost 3,000 adults on their perceptions of aging. According to their research, “Getting old isn’t nearly as bad as people think it will be. Nor is it quite as good.”

One question they asked was When does old age begin? They averaged answers from their respondents and came up with age 68 … old age begins at age 68. Of course, the tendency for younger adults (under 30) is to set a lower mark (age 60), but as one ages, it’s common to identify old age as a number beyond where you are at the moment.

The book of Genesis records the history of numerous individuals who lived to an incredibly ripe old age. Genesis 5:27 tells us Methuselah lived to be 969 years before he died. Others from that pre-flood era were similarly blessed: Adam – 930 years, Seth – 912 years, Enosh – 905 years. Granted, it’s hard to imagine our bodies managing to live and be functional for that length of time. Things definitely changed after the flood.

I love what Proverbs 20:29 says about aging:  The glory of young men is their strength, gray hair the splendor of the old. Even better is Proverbs 16:31 that declares:  Gray hair is a crown of splendor; it is attained in the way of righteousness. In both these proverbs, it’s clear that aging is not a condition to be despised, but rather to be respected and treasured. Aging is simply another stage of life.

None of us looks forward to the troubling aspects of old age. That’s why the example of Elisabeth Elliot (for one) is so instructive. Her husband, Lars, said Elliot “responded to the onset of her cognitive decline with the same attitude she displayed toward the deaths of her previous husbands: peace.”

I hope I can adopt a similar attitude and be like the Proverbs 31 woman who is described in the passage as girding herself with “Strength and dignity [as] her clothing” and who fearlessly “smiles at the future.” Right now, I would call that an Elisabeth Elliot smile.