Through the years, I’ve had similar conversations with others. When political philosophies differ, the rigid scale of right or wrong tends to prevail. My political convictions are right, my neighbor’s are wrong (or stupid or ignorant). This is precisely why mothers throughout time have advised their children to avoid discussions of religion or politics!

While doing my morning workout today, I viewed part of an interesting film which offered insight about this tension. The 2009 film is Within the Whirlwind, starring Emily Watson in a role set during Stalin’s reign of terror. The movie chronicles the struggle of Russian author and poet Yevgenia Ginzburg (1904-1977), a Moscow literature professor (and card-carrying member of the Communist Party) who was condemned to a Siberian work camp after being accused and hastily convicted of terrorism.

Will Anyone Accept Responsibility?

There’s a compelling scene on a train headed for Siberia. Female captives stuffed into a cattle car discuss their abysmal situation. A younger woman blithely sings praise to Stalin, only to be chided by an older condemned woman who argues there’s one man responsible for their captivity. That man is, in fact, Stalin!

For me, the essential moment from this clip is at 1:58 when another woman (a one-time Mathematics professor) tells Yevgenia Ginzburg:  “… it was a long time ago and it never happened anyway.” There’s no despondency, no rage, not even apparent grief expressed by this former college professor. Her face reflects bleak indifference, a soulless acceptance of cruel orthodoxy. Because she’s been declared GUILTY, she’s lost hope.

As a result, this woman’s well-educated brain is effectively sealed inside a lockbox, relinquishing her ability to question or challenge the disconnect between what she knows to be TRUE against what the party elite tells her is true. This diabolical capitulation (to the powers that be) kills as effectively as a bullet to the brain.

Here it is November 2020. We continue to be (unwittingly) engaged in this gigantic social experiment whereby the masses have capitulated to a political narrative regarding the CCP virus, Covid-19.

It seems like a very long time ago when we accepted the promise that fifteen days of isolation and lockdown would deliver superior results in containing the virus. What has been the result? Death By Lockdown says author Jeffrey Tucker. Mental health deterioration says another. Various sources cite a host of ills:  addictions, depression, PTSD, confusion, anger. Most likely, it will be many years before the full impact is determined.

The sonnet below, Fifteen Days, reflects on the progression of this narrative and its consequences. As with the Russian women on the train, we’ve been thrust into an untenable future. How many years must we endure this Siberia? 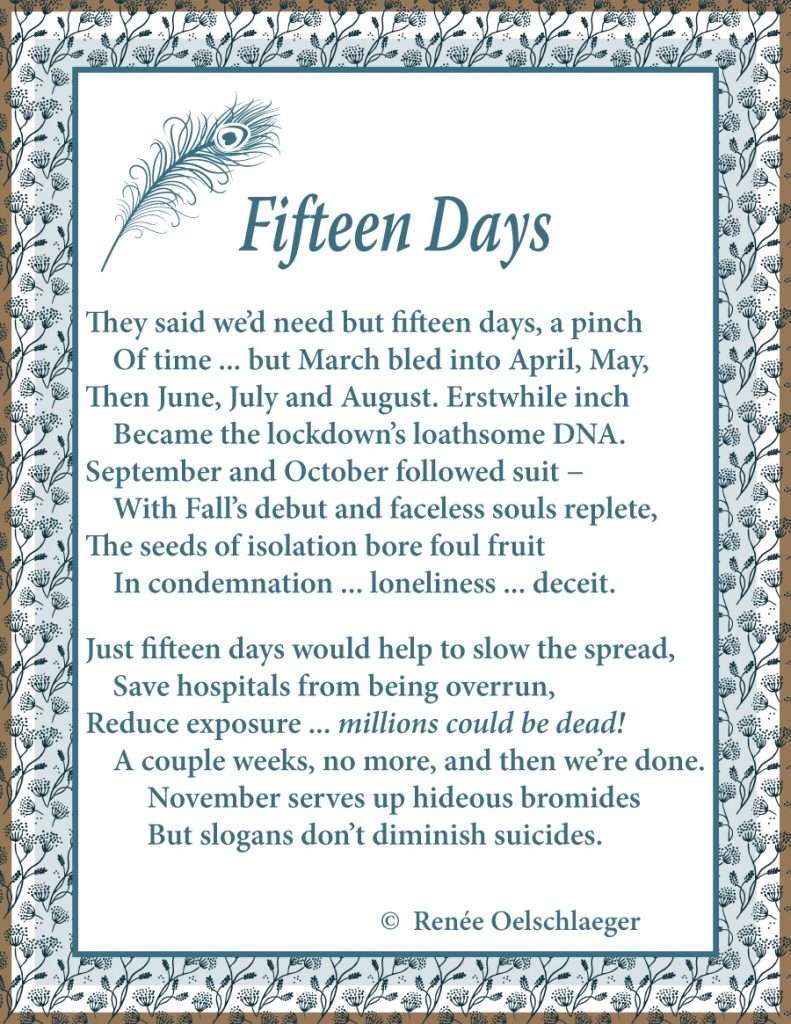 We might choose the path of least resistance, believing what our overlords tell us, praising their benevolent leadership even if it means spending decades in a re-education gulag. As resistance seems futile and the memory dulls, it won’t actually matter.

We will tell ourselves … it was long ago and it never happened anyway.