Throughout childhood, my older brother was a role model and I eagerly followed him, learning from his example. He’s two years older and surely, I must have been an annoying shadow at times. When he decided to learn the violin in grade school, I followed suit. If he climbed a tree, I’d be directly behind him. An incident from junior high comes to mind.

My brother and his friends (all boys) were hunting rabbits in the barren cornfield near our house. Naturally, they didn’t want a girl tagging along but I begged and bargained:  I agreed to carry any rabbits they managed to snag. (It probably wasn’t the best bargain I’ve ever negotiated!)

I thought it unlikely they’d catch even one rabbit … imagine my chagrin when they bagged two! But I kept my side of the bargain, grasping a pair of rabbit ears with each hand for the trek homeward.

Needless to say, this experience ended my “hunting” inclination. I began emerging from my brother’s shadow to do my own thing. But even today, he acknowledges gratefulness to his younger sister (shadow) for introducing him to one of my classmates – now his wife with whom he recently celebrated 53 years of married life together.

Among their many talents, both my brother and his wife are visual artists. Even when we were high school students, they produced impressive pieces for art shows and displays. (Can’t deny I was envious of their talent.)

More recently, my sister-in-law showed a painting in a local exhibit. At the unveiling, she shared with the audience her vision for the piece. I’m posting it below, but unfortunately, the image is a poor facsimile. There’s a reflective glass overlay (not captured in the digital image), and for the viewer who sees his/her face reflected in the glass, the painting poses an implicit question:  what does the Cross mean to you?

I attended the showing with my sister-in-law. Someone in the audience asked what motivated you to paint this? To me, that’s an absurd question. Why would it matter? It’s like asking someone why do you prefer cherry pie over chocolate cream pie! Interact with (love or hate) the art, but don’t psycho-babble the raison d’être for its existence.

Though I’m not a visual artist, it’s my opinion every work of art (regardless of the medium) stands on its own merit. Please don’t ask the artist to explain motivation or why art was produced in a particular way!! No! Interpretation of art is (and should rightly stay) in the eye of the beholder. Your understanding of it may differ from mine; most likely, your appreciation won’t mirror mine. And that’s okay. We all have different tastes.

On the way home from the exhibit, I was already composing my response … mentally writing lines of a sonnet. The Cross of Christ presents a confrontation and demands a response! When one is confronted with the Cross (especially seeing one’s reflection superimposed on the Cross), one must respond:  accept God’s free gift or reject. Yes, seek to understand the message of the Gospel, but its meaning doesn’t alter even if you walk away unchanged. 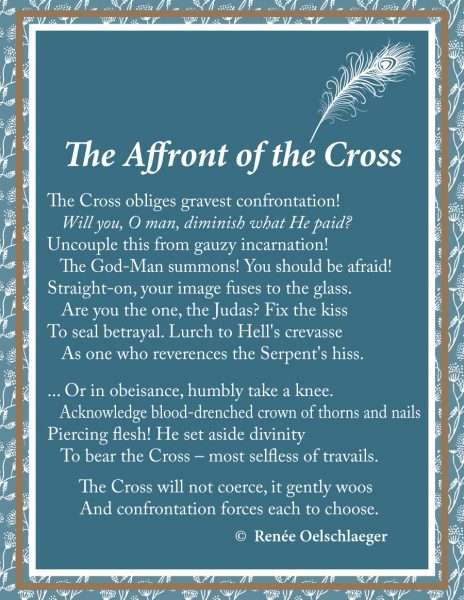