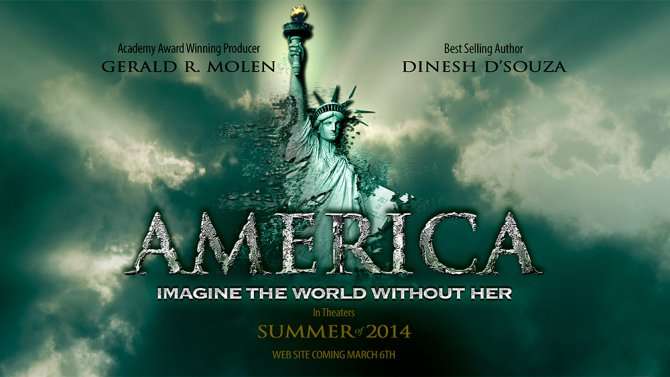 I won’t spend a lot of time outlining the answers D’Souza formulates to refute this five-point critique. I encourage you to view the film yourself to understand his approach. Though he presented a cohesive argument through the movie, I found myself wishing he could further develop his ideas because the picture he presented was incomplete. (I acknowledge the limitations of a 103-minute movie though.)

For some people Dinesh D’Souza is a polarizing figure. I hope we can at least agree he’s an intelligent man with a point of view informed (in large part) by his love for his adopted country (the United States). With his numerous products (books, articles, films, etc.), he has gone from relatively humble circumstances in his native Bombay to become a best-selling author and cultural commentator. His last film 2016:  Obama’s America is listed in the top ten (total gross) for documentary films. These are bonafides that suggest he has earned the right to be heard in the public square. Whether you hear him out is your choice.

I’ll also acknowledge D’Souza recently pleaded guilty to a charge of making illegal campaign contributions. While I won’t excuse this action, I’ve talked with numerous donors and political candidates and I understand the campaign finance laws are fraught with traps resulting in too many individuals through the years being snagged in this net (see here, here, here). I’m told if D’Souza had created a PAC, there’d have been no scrutiny of his contributions.

And if criticism of D’Souza’s foolish choice in handling his personal checkbook is what dissuades you from seeing a film about something larger than one individual, shame on you.

Phew! Now that I have all that out of the way … Without getting terribly political, I want to think more about the movie’s initial proposal:  what if America had never existed? What if (as one re-enactment scene poses) George Washington had been killed on the battlefield during the Revolutionary War? Where would we be (those of us who are Americans) … or perhaps more to the point, would we be?

For myself, I can’t speak from the viewpoint of an immigrant (as D’Souza does). Nevertheless, I’ve participated in the American Dream as I understand it. From my earliest years, I understood (only in part, I’m sure) what my family went through to get to this country, to begin from humble position, to take the steps to become naturalized Americans, and to seize opportunities for moving up the ladder of success. At least one of my ancestors spent seven years in indentured servitude to pay for his passage to America. Seven years! His freedom and self-determination were worth that much to him!

In some respects, I can imagine these family members came to this new land clutching the same excitement and enthusiasm one would have today when considering any new venture:  get in on the ground floor, it’s a place for a fresh start, golden opportunities and the promise of commensurate rewards! Think of it! My family members (and countless others like them) didn’t enter America to get a handout. (They’d have been insulted for anyone to suggest such nonsense!) They came prepared to work hard for the privilege of working hard enough to build their piece of the American Dream.

In President John F. Kennedy’s 1961 Inaugural address (an occasion he described as “a celebration of freedom”), he said:  “Ask not what your country can do for you — ask what you can do for your country.” I think about Kennedy’s challenge and its applicability for Americans today.

Instead of being down-in-the-mouth about our country, do something! Instead of accepting hopelessness as a mantra, do something! Are jobs hard to find? Yes. But if you can’t find a paying job, find something you can do to minister to others (soup kitchen? homeless shelter?)

What can you do for your country? Change it. The change starts with you and with me. May God continue to bless America!