Capitalizing on the current hysteria about law enforcement militarization, the ACLU released its opinion on the subject in a July report titled “The War Comes Home.” This report promotes a perception that the weapons used to fight our wars over the last 20 years have been purposefully brought from the battlefields in foreign lands to hyper-arm our home-based law enforcement units. Further, the ACLU suggests the attitudes of war are pervasive among state-side police officers, who have adopted “a warrior mentality … who think of the people they’re supposed to serve as enemies.“

First of all, let’s get real. We already know a scandalous portion of the armaments used to fight wars in Iraq and Afghanistan were left behind and are now in the hands of militant groups! Even The Daily Kos had to concede that the bad guys (their words) have hit the jackpot by seizing left-behind American weaponry.

I’ve been told the Mine Resistant Ambush Protected (MRAP) vehicles cost nearly $600,000 each. These vehicles certainly helped to protect our troops in wars where land-mines and other dangers were prevalent. I’m grateful these vehicles kept our troops serving overseas from harm! There were enough other dangers in their foreign assignments.

Yes, US-based law enforcement departments have been acquiring these vehicles as surplus equipment, sometimes for as little as $5,000 each. Frankly, I’d a lot rather have those monsters owned by our local police departments than in the hands of barbarians flying black flags and preparing to spread their mayhem far and wide!

Permit me to transition to a more personal level. The purported militarization of local law enforcement is, in my mind, nothing more than supplying these agencies with the best equipment possible that allows them to adequately perform their sometimes thankless jobs. If the enemy had armor-piercing bullets, would you send a soldier into battle against that enemy armed only with a Bowie knife? Of course not! Soldiers need proper equipment to do their jobs well! When lives are on the line, why would we skimp on proper and necessary equipment?

Speaking as the mom of a law enforcement officer, I believe I will live the rest of my life with one specific memory seared into my brain:  it was one of the first occasions seeing my son in uniform after he graduated from the police academy. With characteristic maternal pride, I threw my arms around him and this simple gesture reinforced my awareness of the body armor he wore beneath his crisp uniform. I didn’t care for it.

On reflection, however, I had to admit the kevlar vest he wore might make the difference, one day, whether he lived or died. In that moment, I wanted my son to wear it! How thankful I was to know he had it!

We no longer live in Mayberry, USA. Our towns and cities are no longer places where a benign Andy Taylor needs only to steer a drunken Otis into the jail cell to sleep it off and then devote his spare time to keeping a hapless deputy by the name of Barney Fife from expending the one bullet contained within his sidearm. In an ideal world, that might be all we need. But this is not an ideal world. 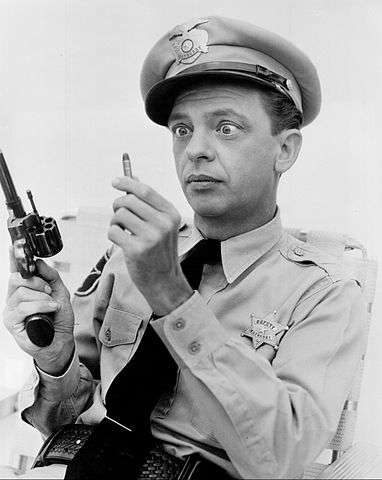 Even as long ago as 1997, criminals (like the perpetrators of the North Hollywood bank robbery) have adopted their own high-powered weapons and body armor. They’ve adopted diabolical strategies for succeeding at their bad deeds … or taking out as many people as possible with them when they die.

In the forty-five minute gun battle with the North Hollywood thugs, law enforcement officers were badly outgunned and eighteen individuals were injured. The property loss was also substantial. In our increasingly barbaric world, these bad actors (both of whom were willing to die and eventually did) provided a horrific demonstration to law enforcement officers that there’s a price to be paid when the bad guys have better equipment.

Yes, bad things sometimes happen. The ACLU report makes a point to highlight events gone wrong, but they failed to mention all the times during which confrontations were peacefully resolved and innocent people were protected from hooligans bent on destruction. We don’t hear about the latter; because of its sensational nature, the former is what makes the nightly news.

Sin is evident everywhere in our world. Whether it’s petty or major crime, wrongdoing proliferates. When criminals are confronted by law enforcement officers, the criminals are intent on staying out of jail. A recent viral video (from an officer’s dash-cam) showed a man beating the officer senseless while his pre-teen daughter looked on. When the girl protested her dad’s criminal act, he explained:  “I can’t go to jail, honey. Get back in the car.”

As long as there is sin, our civilized world needs people who will push back against it. Law enforcement officers put their lives on the line everyday to provide some of that push-back. Unless they have the equipment necessary for doing their jobs, lawlessness will win out. Then, God help us all.