In yesterday’s post, I mentioned a personality quirk, specifically, my OCD. This is – of course (how could it not be?) – my dear mother’s fault. Totally! The crazy compulsion to make my bed everyday? Yep, that’s my mom. Just about the time I started walking, she was already training me to smooth out the wrinkles and plump up the pillows on my youth bed. It only went downhill from there.

My mother attended boarding school from the age of six. This was in the 1930s and the first things she learned were: to do as she was told, to follow the rules, to conform and to be a good girl. I think the cottage shown above was home for eight to twelve girls plus a house mother. (This may not have been her actual home, but hers would have been nearly identical.) There were multiple other cottages housing other groups of girls on the property. The girls lived there year-round and attended school on the property, visiting relatives for only a week or two in August and December.

The death of my maternal grandfather resulted in my grandmother having to seek a job to support herself and my mom. They were living in New Jersey at the time, and grandmother didn’t wish to leave my mom to her own devices or to the negative influences close at hand. Providentially, someone told my grandmother about a boarding school for fatherless girls located on the outskirts of Philadelphia. The school had been founded by a philanthropist named Charles E. Ellis and was known in its early years as Ellis College.

During his lifetime, Mr. Ellis had become aware of philanthropist Stephen Girard (who died in 1831). Girard’s legacy provided for a school for “poor, white, male orphans” and Girard College was created. Mr. Ellis took inspiration from Girard’s example and in ordering his own estate, Ellis instructed the endowment of a school for girls. When he died in 1909 from a gunshot to the head (reports differed about whether it was suicide or an accident), his bequest (about $4 million) was set up to provide “free education and maintenance for fatherless girls” allowing for education and maintenance “until age seventeen.”

The first girls were admitted to the school in 1919. My mother’s dad died in July 1932 and only weeks later, Mom was enrolled in Ellis College, a wee six-year-old, fatherless and no doubt, totally perplexed by the sudden changes in her life. When I think about how these events contributed to the resourceful and self-reliant individual she would become in adulthood, I am in awe.

During the years the school operated, the gift Charles E. Ellis ensured for fewer than 1500 fatherless girls can never be accurately measured. My mother received an excellent education and benefitted from numerous advantages she’d never have been able to access as the fatherless offspring of a widow woman of limited means. The Ellis campus spanned over 300 acres with a summer camp, a swimming pool and lots of outdoor activities. The girls received all the requisite instruction that upper-crust prep school girls of that era received. In every sense, it was a privileged education … except for the fact these were fatherless girls, that is.

I often wonder about the philanthropic works of men like Charles E. Ellis and Stephen Girard. Both Ellis and Girard created institutions that allowed countless children to benefit from an excellent education, in spite being disadvantaged due to fatherlessness. Girard College opened for students in 1848 and exists today on a campus of 40+ acres in Philadelphia PA. Ellis College closed to students in 1977 but the campus at Newtown Square is still a marvelous place (though some of the acreage has been sold for development).

[In case you’re interested in reading more about Ellis, author Thomas J. DiFilippo has written an excellent history that also offers some information about Girard College where he attended.]

Living and growing up in the Ellis College cottage setting, my mother also learned the fundamentals of housekeeping, including making her bed everyday and pitching in with the kitchen duties (though a cook was on-site). The house mother lovingly tucked in her charges at night (standing in as best she could as the on-site “parent”). Because the girls in each cottage varied in age, the younger girls were matched up with a “big sister.” A warm sense of family togetherness permeated these cottage homes. 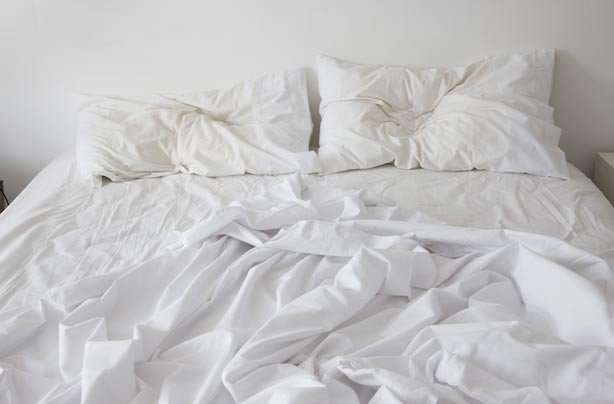 With the formative years of my mom’s life spent learning this sort of army regimentation, it would have been natural for the experience to inform her adult life. She taught her children the spit-and-polish, everything-in-its-place model she’d learned at Ellis. As a consequence, I suffer this deeply-embedded case of OCD! Even as I’ve relaxed in more recent years, leaving a bed unmade (even when I’m not looking directly at it) is disconcerting (a disturbance in the force, if you will).

So, there you have it, blame properly placed where it belongs! For anyone who’s curious, no, I’ve never managed to bounce a quarter off my made-bed. Whether that’s a movie- or military-based myth, I can’t say, but I’ve never managed it!

17 thoughts on “Blame Where Blame Is Due”