Several weeks ago, my brother-in-law emailed an opinion piece from The New York Times titled What Makes People Poor? by Thomas B. Edsall. Considering my post about our current economy, the Edsall piece has provoked added reflection for me. 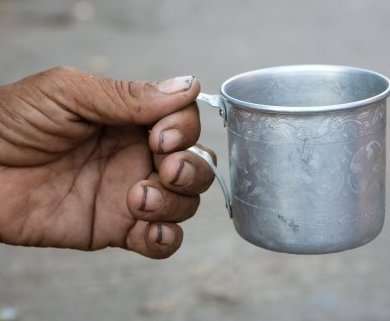 A simple Google search on “poverty” produces websites and articles in abundance. At least one offers mind-numbing statistics on worldwide poverty. Those facts alone are enough to depress anyone. But Professor Edsall’s thoughts don’t bog down with stats. He attempts to present the “discussion of poverty as a technical problem, not a moral one.”

The kernel of Edsall’s piece (as I understand it) is to call for “ideological convergence [that] could produce a more empirically grounded understanding of the causes of poverty and of social and economic inequality as well.” Even though analysis (on both left and right) tends to be somewhat complementary, he blames “political polarization” for preventing a desired synthesis.

I understand Edsall’s approach, i.e. assessing poverty as a technical problem. However, I think if we insist on ignoring the moral aspect, poverty will persist. As one might expect, my approach to poverty must be framed from a biblical context (as I understand Scripture) … so even if your framework is different, I hope you’ll hear/read me out.

Two moral and cultural imperatives from Scripture are the basis for my considerations. First is the imperative to “… be fruitful and multiply and fill the earth and subdue it.” Second is for each person to “… provide for his own, especially for those of his household.”

Being fruitful, that’s just sort of the nature of man, isn’t it? Reproducing wasn’t just God’s admonition when Adam and Eve were the sole inhabitants on earth. After the Flood, God sealed his covenant with Noah. (Genesis 9:1) Implicitly, God gave Abraham and his descendants the same emphatic charge, God telling Abraham “I will make you exceedingly fruitful.” (Genesis 17). God later reiterated this covenant with Jacob, a descendant of Abraham.

The second imperative, providing for one’s own, comes from 1st Timothy 5:8. In context, the apostle Paul provided specific guidelines for how the New Testament church should care for widows and orphans, the poor and needy in their midst. But even as Paul gave these guidelines, he reminded Timothy that failing to provide for one’s own (especially those of his household) was, in essence, to “deny the faith.“ 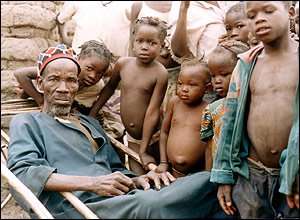 Over thirty years ago I wrote an article about a local dentist who traveled to Burkina Faso to provide short-term dental ministry to needy individuals. The dentist told me a bit about the Voltaics (before 1984 Burkina Faso was called Upper Volta) and I also researched the culture of this land-locked nation. It was my first exposure to the concept of subsistent living.

My dentist friend told me the families are mostly broken, with fathers adrift and mothers struggling to care for children without paternal provision. If they have resources to sow seeds in a garden plot, the women rarely have enough to see them through one rainy season to the next. What they can grow allows a meager subsistence with none left over to trade for other goods.

Images of the Voltaic culture come to mind when I compare it to Edsall’s reference (from Autor and Wasserman, two economists he cited) that “the absence of stable fathers from children’s lives has particularly significant adverse consequences for boys’ psychosocial development and educational achievement.”

To re-state this observation in light of the imperatives of scripture, fathers (observed in studies by current researchers as well as by a dentist in the mid-1980s Burkina Faso) have quite aptly reproduced but have failed to provide for their own. While this goes against feminist rhetoric, it’s true nonetheless: no matter how hard a mother tries to provide for her family, her efforts will never heal the wound caused by an absent father.

The Bible also tells us “the heart is more deceitful than all else and desperately sick.” (Jeremiah 17:9) In other words, man’s heart is impoverished … he exists in poverty! What makes people poor? There are technical aspects and Prof. Edsall covers them quite well. But if we could get beyond political polarization to find an ideological consensus that sets us on the path of innovative solutions to poverty, we’d still be dealing with an impoverishment of the soul. 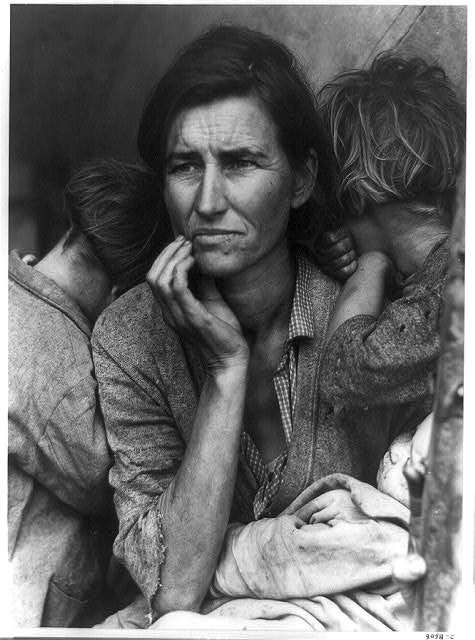 Contrast today’s stereotypical poor with pictures from the Depression Era. The iconic picture (at right) is one that resonates. The woman would not be considered emaciated, but obviously, she had missed some meals. As I understand it, starvation (while a concern) was less troubling than malnutrition. My sense, though, is that however little Depression Era families had in the way of worldly goods, they still weren’t living a subsistent existence.

But one thing about that era:  I’ve read nearly 1.5 million women were abandoned by their husbands. That stat alone would have cast many women with children into a difficult (if not subsistent) situation.

Our understanding of poor is often filtered through our own experience. Wherever I sit on the wealth/poverty continuum, those to one side of me are poor and those on the other side are rich. Rather than label certain Americans as poor, I think a better term for them would be dependent. With their cell phones and televisions and changes of clothing and over-full bellies, the American style of living poor is embarrassingly abundant if we contrast it to the poor in other nations.

What makes people poor? I’d answer that question by saying it’s an impoverishment of spirit, a dearth of perspective, a lack of relationships (the intact family, for one) and a lack of resources. How does our culture relieve this impoverishment? By strengthening and encouraging family connections, by encouraging dads to stay in their homes and nurture familial bonds. These measures to address poverty would be strategic but effective because they target deep human needs. Even the poorest of the poor can be rich in faith … and that’s the real (and only lasting) solution to poverty of spirit.