“There’s a new secret to get your child to behave at the dinner table − cut up their food and they’ll relax.” So says the Cornell University Food and Brand Lab. To help them publicize their recent study, they’ve provided art work (below) to drive home the point. 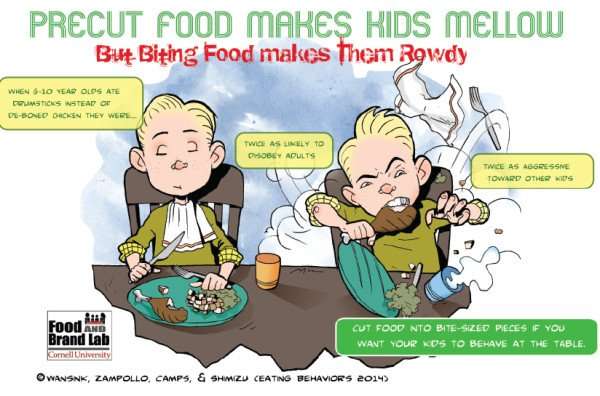 Highlights from this scholarly contribution of academic cogitation include the following prominent bullet points:

For parents who’ve been wondering anxiously why Johnny or Jenny is (1) disobedient, (2) rambunctious, (3) fidgety, or (4) all of the above, the brilliant Ph.D. researchers (3 of them) along with an M.S. researcher at Cornell have supplied the ultimate answer to explain Johnny or Jenny’s misbehaviors.

Whew! And you thought your child’s conduct would require counseling!

My first thought (when hearing and reading about this “study”) was to presume a college senior (looking for an easy A) settled on this dubious topic as a senior project. But no.

It appears to be the misbegotten brainchild of an already full-fledged Ph.D. and author, Brian Wansink. As founder of the Food and Brand Lab, Professor Wansink appears to have identified his mission in life − assessing and transforming other people’s eating habits. You may want to learn more about Wansink, but don’t depend on his website; most of the pertinent links (save for the Hi-Res Photos and Vita links) take you to “Page Not Found” locations. Too busy authoring scholarly studies, I guess.

Full disclosure, first. I’m no Ph.D. I don’t have a team of researchers, university funding and cartoonists on my staff. Actually, I don’t even have a staff … unless you include the massive black dog lying in the next room.

But this I know:  plain and simple, this study is boneheaded! Furthermore, it is a huge disservice to parents and their children! Note the weasel-wording of the first bullet point:  Using teeth to bite food may be connected to aggressive behavior, as with animals. When an infant plants his or her teeth into a parent’s flesh, that too may be an aggressive action … but it could also mean that infant is suffering teething pain. How utterly ludicrous to evoke the image “as with animals” and attach it to a normal, natural act of biting!

Eating on-the-bone-chicken makes children appear “more aggressive and less compliant”? Really? Appear = seem … hardly a definitive statement, a subjective observation at best. (Did the researchers decide in advance what they wanted to find?) Observe twelve children (yes, twelve children) eating lunch at a summer camp and extrapolate subjective perceptions from what the researcher notes. (No chance for bias or misinterpretation there, right?)

The suggested solution for better behavior at the dinner table? “Cut up their food and they’ll relax.” But the teeth … children still have to chew. Alas, unless the teeth are all yanked out, children may be tempted from time to time to bare their teeth and bite − as with animals. We can’t have that!

God forbid there should be a chicken leg or ear of corn or a crunchy apple in the house! Purge it all! Nothing but shredded chicken, creamed corn and applesauce allowed! Render the entire eating experience bland and unappealing to the senses. Let’s all be anorexic!

I shudder to think how much money (tax dollars?) Cornell University (and other institutions of higher learning) are devoting to such lofty and informative endeavors. How in the world did people manage in the long-ago days before micromanagement and behavior modification burrowed into every aspect of our everyday lives? How did previous generations of children ever manage to grow up, unassisted by the ultra-supervision of Big Brother watching their every move?

But children do grow up. Alas, many of them never take time (even momentarily) to consider the possibility that the “facial feedback” brought on by baring the teeth to bite (according to Wansink) signals common animalistic aggression. (Surely we are doomed!)

Maybe we should just feed them through a straw until they’re twenty-six years of age?