During the early years of my life, Sunday was actually considered a “day of rest.” We’d spend the morning attending Sunday School and Church, of course, but after we’d had lunch, everyone laid down for a mid-afternoon nap. The house was probably quieter than any other time of the week. It was a respite from the hustle-bustle that started up again as soon as the sun rose on Monday morning. 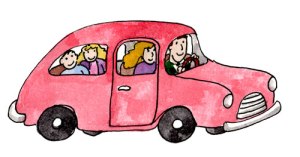 I remember one Sunday that was different. My brothers and I slept upstairs. (One is two years older than me, the other eighteen months younger than me.) That Sunday, I woke up from my nap and on my way downstairs, I noted that my younger brother was still napping. My older brother was not in his bed though, so I proceeded downstairs to find him. I quietly searched all through the small house, but didn’t succeed in locating him. Eventually, I tiptoed to my mother’s side and asked where Eric was. She was awake but resting beside my dad.

It didn’t take long to figure out my brother was not in the house, nor was he outside in the yard playing. I can’t say my parents panicked, but within minutes they were looking everywhere. I think it may have been an alert neighbor who noticed a tow-headed little boy walking alone down the sidewalk. Because he carried a suitcase, he surely looked out of place. He had slipped out while everyone else was resting. Where he was going wasn’t clear, but he had succeeded (to that point) with his plan to run away.

Apparently, there had been some family slight that he’d taken personally and he was bold enough to believe he could make it on his own in the world!

Many years later, as a parent myself, I remember my oldest daughter making the same decision. By my recollection, she didn’t get farther than the end of our driveway, but her strong-willed nature certainly gave us pause to watch closely from the window. She lingered there at the end of the driveway before slowly turning back. I’m grateful she quickly realized her plan had some holes in it!

The sonnet below was written with that occasion in mind.

I wrote this sonnet such a long time ago, I had the vaguest of recollections its unusual rhyme scheme (a-b-c-a-b-c c-b-d-b a-d-d-a) followed the Mason Sonnet form. (This is not a common form for the sonnet.) Invented by a poet named Madeline Mason, information is difficult to find online. However, I located a blog devoted to sonnet forms and the Mason Sonnet is among the many forms discussed on that site.

To my dismay, it seems the rhyme scheme I used isn’t strictly the Mason sonnet form (a-b-c-a-b-c-b-c d-b-a-d-d-a)! (This should only be of concern to purists, I know.) That being the case, I suppose the rhyme scheme I utilized can only be considered a variant, non-conforming tribute to Mason.

No matter. The poem is a sweet reminder of a little red-haired girl I once knew. Today, she’s blonde and closing in on her fortieth birthday.

4 thoughts on “Breaking Away”