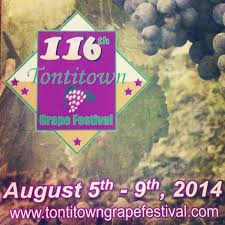 One of the biggest draws of the festival is a traditional Italian spaghetti dinner, prepared and served by volunteers. This effort begins weeks ahead of the festival and volunteers will make some 3,600 pounds of spaghetti to feed about 8,000 people. The dinner serves as an annual fundraiser for the church.

Almost every year, my Beloved purchases a $1.00 chance to win a brand new truck given away on the final night of the festival. Recognizing our chances are slim, we’re glad to contribute to the fundraiser. (I know, such charity is pretty underwhelming!)

Grapes used to be a large crop that helped build the economy for our state. From what I can tell right now, grapes have steadily decreased almost to economic irrelevance. Too frequently, sudden late freezes have killed or severely damaged the crops, making for a slim harvest. (Weather issues have also plagued other once-vibrant crops hereabouts, notably peaches and apples.) Still, the Grape Festival continues to be a mainstay to the area.

Even though a number of the vineyards have disappeared, local and regional micro-brewers and wineries have begun to multiply again. It’s always fun to have a new place with new products to sample! New micro-brewers and vintners present an interesting array of tempting options.

There’s also something old-worldish and quaint about Tontitown. In addition to the city park’s playground equipment, baseball diamond and tennis courts, there are bocce ball courts where men gather to enjoy competitive play. During the May celebration of Heritage Day, they hold a bocce tournament.

Small towns offer such an appeal with their unique flavor, charming local culture and family-friendly activities. Tontitown is one such place that, if you come to enjoy the festival, you’ll create pleasing memories that (sooner or later) will draw you back again.