As I understand the issue, SCOTUS will be grappling with the Constitution’s Fourteenth Amendment which was ratified in 1868, granting US citizenship to former slaves. Suffice it to say, I’m not Constitutional scholar, but I can certainly read the text of this amendment and understand why it was adopted as part of our Constitution.

I’ve posted before about my views on marriage, its sanctity, its central role in growing children who are happy, well-adjusted and secure. I’ve made numerous observations about how devastating divorce can be, the ongoing struggles children of divorce encounter throughout their lives. Why any parent would choose his or her own “happiness” (narcissistic delusion) over a child’s health and well-being is beyond me!

Often, when I compose, random ideas begin gathering and they eventually coalesce into a theme. When a poem is nearly complete, I think about an appropriate connection to potential topics I’m considering for future posts. On at least half a dozen occasions, I made a conscious choice to set aside the poem posted below. My reservations about it were predictable. Is the poem stereotyping? Is it sexist? Is there a feminist in the country who won’t consider my first line objectionable? A girl is just a girl.

Still, as SCOTUS prepares to hear the arguments on an issue that strikes at the foundation of our country and cultural moorings, this seemed the most appropriate time to post the sonnet … for better or worse … because in the end, not only does the family matter, but those little ones who are being sheltered there deserve to have their innocence guarded from the onslaught of muck and brutality that is everywhere around them. If we can’t save the country, at least let’s try to save the precious and irreplaceable children! 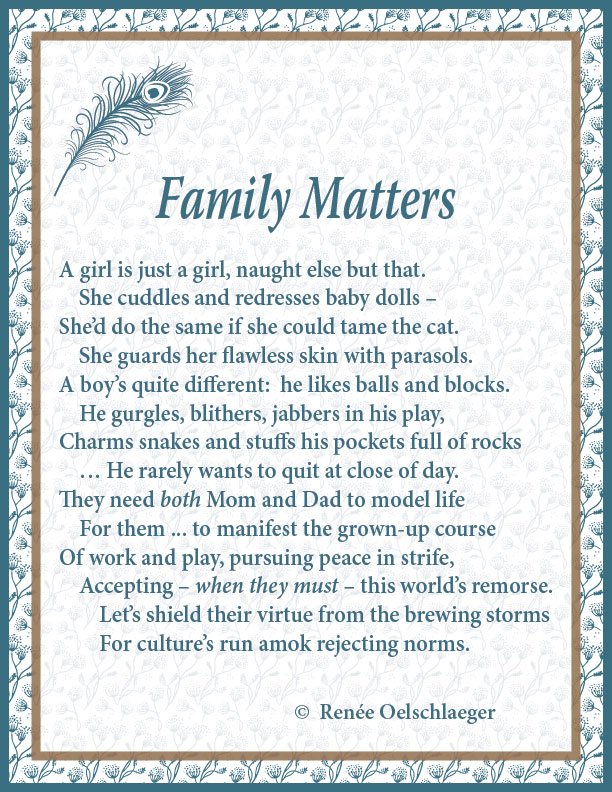 3 thoughts on “Children In The Crosshairs”