What is it about soup? The outdoor temperature plunges, winds blow briskly and snowflakes accumulate … and suddenly, the palate demands comfort food, a hearty bowl of soup with an aromatic bread on the side. Whether it’s chili, chicken noodle soup or a chowder, a steaming bowl lightly satisfies taste buds with each spoonful delivering goodness from the tongue all the way down to our toes! 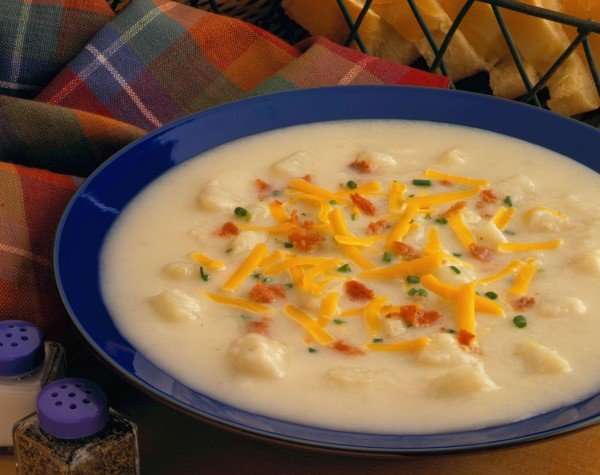 Being snowed in today, my lunch clean-up moved almost seamlessly into dinner preparations … a large pot of chicken corn chowder (with potatoes, plus a cup of bacon bits). My adventurous grandson suggested I could go heavier on the comfort food by adding both beef and pork, but as my limit is two meats in one dish, his wish wasn’t granted. Even comfort has its limits!

The concept of comfort food has expanded through the years. More than twenty years ago, the authors of Chicken Soup for the Soul released their first book. This volume was a compilation of inspirational stories intended to offer comfort and to feed the souls of their readers. Based on the book’s popularity as well as the 200+ volumes that have followed, chicken soup via the written word provides a sizable serving of comfort.

As I chopped vegetables (onions, green peppers, celery) for today’s chowder, I reflected on the Genesis account of brothers Esau and Jacob … and their pot of stew. The account in the first book of the Bible relates how Esau (a skillful hunter) came in from the field and announced he was starving. Jacob had a pot of stew cooking and Esau requested to have “… a swallow of that red stuff there.”

The text makes it clear this scenario occurred by design because the younger brother (Jacob) had a plan. For a bowl of soup, Jacob expected something specific in return … the firstborn’s right of inheritance. Okay, I’ll give you a bowl of stew, but first, sell me your birthright.

Ah, the shortsightedness of Esau – I’m about to die! What use then is the birthright to me? I need food now!

So Esau filled his belly with bread and lentil stew, drank until he was satiated and “…went on his way.” The chapter ends with one short and very sad sentence:  “Thus Esau despised his birthright.”

No longer famished, Esau enjoyed the comfort of an immediate need being satisfied … but for the rest of his life, he’d be haunted by his foolhardy choice. Esau became increasingly bitter and had purposed in his heart to murder Jacob (Genesis 27:41) after their father’s eventual death. (By God’s grace, Esau didn’t follow through on his plan.)

This story of Esau despising his birthright should be a cautionary tale for all. Using soup as a metaphor for life, I ask the question, what decisions am I making this week that bring temporary comfort … but that may cause me huge regret next week or next year?

The “red stuff” Esau craved the moment he saw it simmering in Jacob’s stew pot was later identified (Genesis 25:34) as lentil stew. I found a 1981 New York Times Magazine article offering their suggestion about what might have been included in the age-old lentil soup the French call potage Esau. I’d be curious to see what the soup looks like, but it’s unlikely I’ll ever make it myself. One reason:  I hate peas.