With loss so fresh, how could anyone summon the strength to celebrate the Birth of a child – even the Holy Christ child? For months, she’d been going through the motions. Now, the thought of celebrating Christmas seemed almost beyond reason for her wounded soul.

This mother had three other young children, and she’d tried to manage as best she could, remaining outwardly cheerful, though numb inside. The children continued to be properly dressed and well-fed, tucked into bed at the appropriate hour … a set routine she could achieve without effort. Yet by day’s end, with sadness and fear washing over her once more, she’d stand at the cast-iron kitchen sink, scrubbing pots and pans, mingling tears with the rinse water.

Christmas? The giving of gifts? Entering a store to shop for presents? Everything remotely connected to the holiday brought a new wave of tears and heightened longing for the absent child.

Of course the father grieved, but differently. Besides the loss of his youngest child, he also experienced fear as chilling as he’d felt on a far-off battlefield. He knew he could handle his own grief (deep as it was), but his wife’s bereavement sobered him, causing profound unease.

“I have a single photo of our baby,” she’d told him. “One.” As he crawled into bed next to her each night, he’d touch her pillowcase, feeling for dampness, hoping against hope she hadn’t cried herself to sleep again. 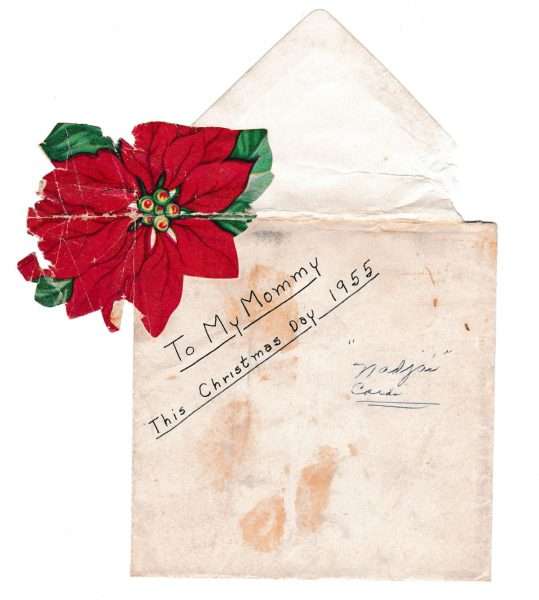 Whether it was inspiration or determination (or equal parts of both), this grieving father contemplated possible plans. Then, he began working through the details. In his heart, he resolved the upcoming Christmas Day would be as special as he could make it!

Choosing the perfect card, he enlisted his best poetic impulse. If their darling daughter could speak from the grave, it might cheer her mother’s heart and bring a long-awaited smile back to his wife’s face! Perhaps he could make it happen. He began with a few lines of verse, a poem that ends with a promise. 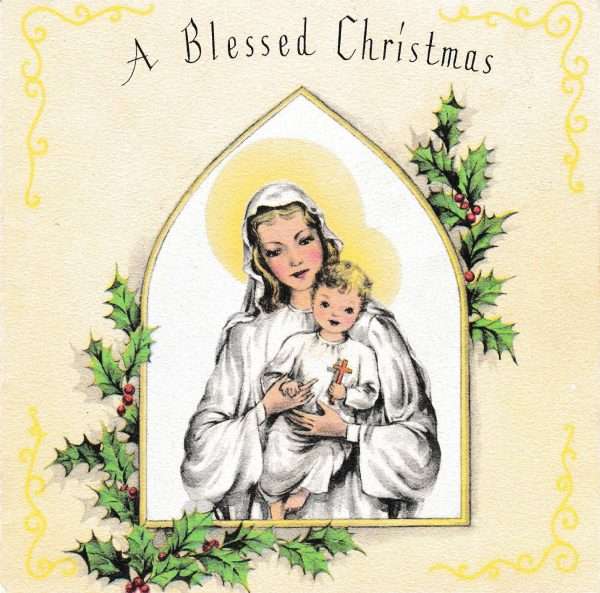 When she first saw the envelope “To My Mommy,” I suspect my mother’s tears flowed as freely as in all the previous months. On the enclosed card front, she saw a mother and child. She knew it was a depiction of Mary and the baby Jesus, of course. Reflecting on her namesake (my mother’s first name was Marion), she felt a renewed connection to Mary’s maternal heart.

She unfolded the card and saw the haloed child. She paused momentarily, wiping away tears. But it was for naught. As she began to read, treasured, handwritten words delivered a message of hope. Her tears flowed unabated, but I have no doubt, those verses quickened the beginning of comfort. 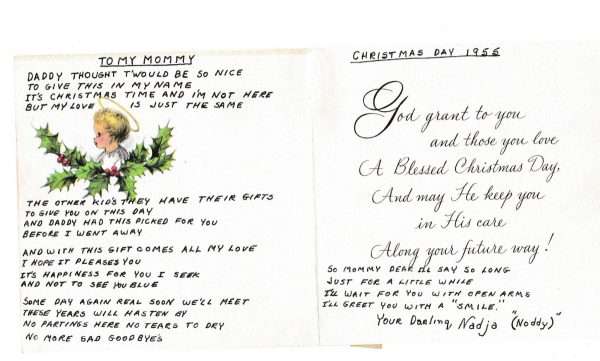 The biblical account of King David’s words (after his child with Bathsheba died) comes to mind. Upon hearing the child had died, David washed himself, took food and went to worship God. His servants were aghast! This, they believed, was the time for mourning! But David understood:  “Can I bring the baby back to life? No. Some day I will go to him, but he cannot come back to me.”

Hard as it must have been for my parents, both understood and took comfort in the reality (the promise) they would be reunited with their baby one day. I’ve posted about my sister before (here). Had she lived, Noddy (as my dad called her) would have been in her mid-60s today. Her fifteen months of life with us were an indelible gift. We were blessed to have her, even for so short a time.

A frail, impaired child, Tiny Tim, is featured in the Dickens story. The tale concludes by repeating Tiny Tim’s pronouncement:  God bless us, everyone!

As we watch the final hours of 2020 dwindle, I acknowledge God’s gracious blessings on me and my family … and I echo Tiny Tim’s benediction. May God bless you, everyone!