Conversations can be tricky. A friendly discussion has the potential to take a turn into unpleasantness or disputation, if and when a differing point of view is pressed. People who were cordial and overflowing with goodwill suddenly become antagonistic and difficult and full of condemnation. The friendly discussion is transformed to argument that can lead to hostility and name-calling and even fisticuffs if the parties are inclined to carry things that far!

This is where Job finds himself in Chapter 15 of The Book of Job. As the first round of point/counterpoint between Job and his friends has closed out (chapters 4 through 14), the tension has begun to rise. Job maintains his innocence … his suffering and pain are not the result of sin in his life, he insists.

But the friends, having come to Job’s side in order to comfort him, have a different point of view. In their separate discourses, they suggest Job must have some hidden sin, something so heinous that God is forced to rain down His wrath.

Each of Job’s three friends has had his say and even while his body is ravaged with open sores and pain, Job has refuted their suggestions. Though Job knows he’s not being punished for sin, he acknowledges his afflictions are real and that God has allowed his humility. He thinks if he can obtain an explanation from God, he’ll be content to die.

Beginning in chapter 15, Eliphaz pipes up again (his first comments were in chapter 4) and this time, he’s taking off the gloves. He claims to have “spoken gently” (verse 11) when he counseled Job in his first monologue. There’s a sense from Eliphaz’ remarks that he’s speaking for the three friends who are insulted that their counsel has been disregarded by Job. In quick order, Eliphaz accuses Job of (1) impiety, (2) arrogance and self-conceit, (3) contempt of their counsel, and finally (4) being disdainful of Almighty God.

Eliphaz maintains his first speech to Job was based on the “consolations of God.” Because Eliphaz believes Job has rejected those consolations (or comforts), he suggests Job deserves to “suffer torment” (verse 20) for his wickedness. This torment (or terror) has already been meted out by God, Eliphaz believes and he further maintains it’s a torment God will continue to reserve for Job because of the immensity of his sin.

In the sonnet below, we have Eliphaz speaking. In this monologue, it’s easy to envision Eliphaz getting in Job’s face and pointing his gnarly finger almost to the tip of Job’s nose. Instead of comfort, Eliphaz serves up a pot of pious condemnation. Some friend, huh? 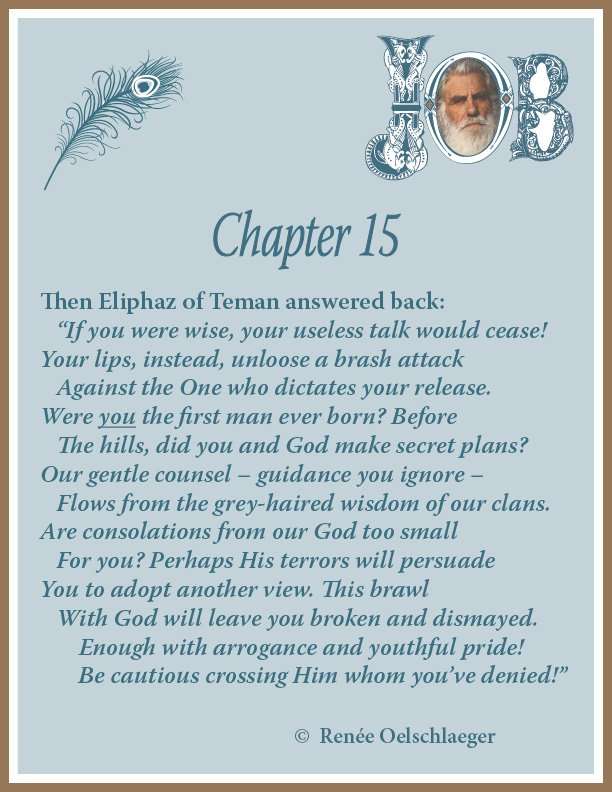 One thought on “Conversation, Consolation, Condemnation”