When I left the house this morning, I knew I’d be sitting in a courtroom. Toward the end of the day, I found myself in an unenviable position … sitting in the witness chair being questioned by three attorneys and fielding additional directions from the presiding judge! (So glad none of them were wearing the white powdered wigs I’ve seen in movies like the one below … I’d have found it hard not to laugh!) 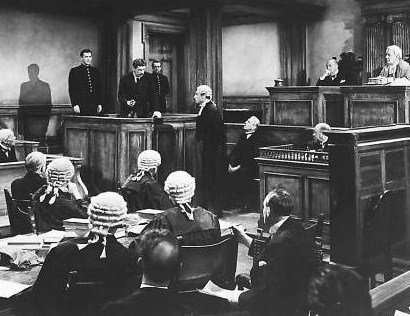 I have never enjoyed being the center of attention … oh, okay, maybe in my younger years but those days are long gone! I’m much more comfortable sitting on a bench behind the railing, watching the events play out as if on a television or movie screen. That’s pretty much how the morning went before lunch (9 a.m. to noon). I’m an election official in my county and the issue before us related to election procedures. The issue was straightforward and I expected to be only an onlooker, but my name on the complaint was reason enough to be present.

It’s funny, too, because I was so confident I’d be an onlooker, I had brought an electronic device so I could sit in the background and work on my poetry! It’s not as if the hearing required my full attention; I’m able to multi-task. I had the beginnings of a whimsical poem rolling through my brain already. All I needed was a bit of time … There once was a courtroom in town, Where lawyers and judges came down … too bad I didn’t have time to finish it!

When we reassembled after lunch at 1 p.m., things continued normally until about 1:23 p.m. when we heard a sudden loud noise and the lights went out. Having heard a news account of the Canadian terror attack while I was driving to get my lunch, I took a deep breath and prayed our fourth floor location was secure. (My concealed-carry Smith & Wesson was in my purse … in my car! The courthouse prohibits firearms except for the Sheriff’s officers who are present.) The electricity to surrounding buildings was also out and it was fairly evident road work a couple blocks away had caused the power outage.

For the next ninety minutes, we sat in the courtroom, anxiously believing we’d be able to continue the hearing but finally the judge announced we’d adjourn until morning. We trudged down the stairs (no elevators) and as we reached the bottom floor, the lights went back on! Since the judge had already adjourned, the consensus was to head home and return at 9 a.m. Little did we know! I had driven about a mile from the courthouse when I received a text telling me the judge had reconvened … so I headed straight back to the courthouse.

This is where things got awkward because the other election officials (my associates) hadn’t gotten quick word as I had. They were gone and who knew if they’d be back? When I arrived, I was the only election official present and the attorney called me to the stand!

As I say, I’ve watched my share of film and television courtroom dramas. (Years ago, my Beloved and I used to watch LA Law, I’ve enjoyed the wisecracking of Boston Legal – until it was no longer funny, and I watch The Good Wife from time to time as well. Oftentimes, the latter is less about the courtroom than drama in the lives of the characters.)

From the back of the courtroom, I’m able to sit and watch, relaxed, wondering when the fireworks so common on the television dramas will break out in real life. Even if it doesn’t, I’m content to watch how things happen in REAL courtrooms. I am at heart a student and this is a new experience for me! So I can sit there and take it all in and not mind … as long as I’m behind the railing.

… But sitting in the witness stand? Oh, boy, am I way out of my element there!

And, because I’m a narrator by nature, I’m a dreadful witness!! I want the judge and the attorneys and the gathered news media and the casual onlookers to understand every bit of the back story. It’s important, don’t you know? The facts need to have context!

Further, when an attorney poses a question for me, I need some definitions to be certain his (or her) understanding of particular words is identical to mine. (In this day and age, when a President of the United States can quibble over the definition of “is,” shouldn’t we seek a common understanding of word meanings?) Add to that the attorney’s oblique formulation of some questions and I’m sure my puzzled look spoke volumes. … Did I mention I was way out of my element?!

I think I must have thoroughly flummoxed the attorneys because (if memory serves me) each of them engaged a second round at the podium and eventually, the judge worked in a few questions for clarification. Each time I thought I was finished – and ready to flee the scene – someone else would press forward! We’ll return in the morning for closing arguments and eventually, a judgment.

Once upon a time, I had thought of attending law school. I was dissuaded after I did some trial transcription (a paid gig) and realized how utterly boring (b-o-r-i-n-g-!) it was for me. Now, I’ve made a second decision about the law. Unless I get called for jury duty, henceforth I prefer my courtroom dramas be exclusively via a television or movie screen. I can enjoy the comfort of my favorite chair, chomp on some popcorn, and when I need a restroom break, I can hit the “pause” button. Alas, the judge definitely won’t allow for that in his courtroom.