During the first few years of our marriage, my Beloved and I often visited family located in other states. On one visit to Kansas where his grandparents lived, his grandmother (Georgia) presented me with one of her prized possessions, the plate pictured below. 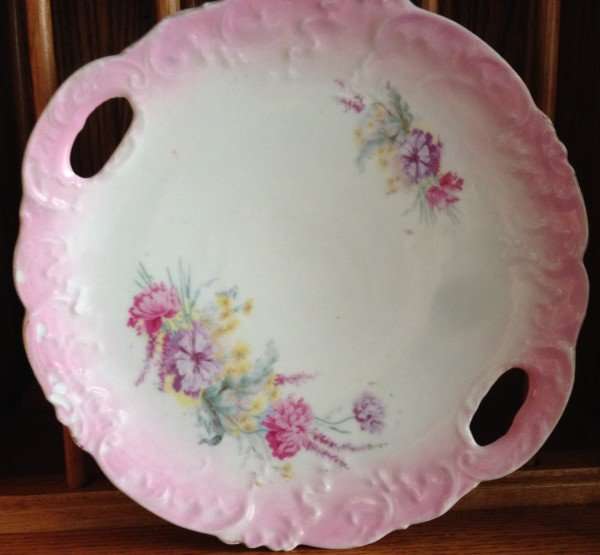 When she gave us the plate, I felt a bit sheepish about accepting it because she intimated there were others in the family who might be unhappy she’d bestowed this gift on her grandson and his (relatively new) wife. I believe she told us the plate had been a wedding gift when she married her husband Fred in 1915.

The plate has been in our possession for more than forty years through multiple moves. Only rarely have I used it for serving a small birthday cake or serving small delicacies for another special occasion. Most of the time, the plate has either been stored or displayed in a glass-front cabinet.

There are no markings on the plate, so I know little about it outside of its having been in Georgia and Fred’s care before it came to us. Is it china? I’m no expert, but if it is china, I tend to think it’s a somewhat crude example. More likely, it’s a porcelain product. Given that the couple were married in 1915, it is nearly a century old. Is it valuable? Who knows? As I said, I’m no expert! (But if the plate has monetary value, it isn’t safe with me. I’m more likely to accidentally break it … so don’t tell me!)

During the era when my Beloved and I were married, many couples had decided not to plunk down loads of cash for the formal china dinnerware previous generations had insisted upon. (We were one of those couples … practical and penurious.) Consequently, I’ve had very little experience with a fine china product; I’m definitely a stoneware gal. (My lack of experience with Noritake or Wedgwood is a deficit I’ve knowingly lived with all these years, but I confess, at times it makes me feel slightly barbaric. Perhaps that’s why my poetry below reflects a slightly passive-aggressive tone?)

With today being the final day for the 2014 iteration of National Poetry Month, I thought a piece of whimsy would be appropriate. (I started the month off with whimsy as well.)