Apparently, there are several people who have observed some variation of the quote:  those who refuse to learn from history are doomed to repeat it. Among those to whom this concept is attributed are Edmund Burke and George Santayana. 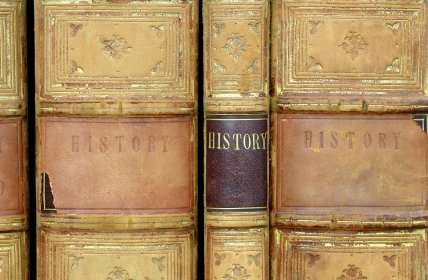 As a child, history didn’t make it to my Top 3 list. I’ve come to believe that was because my teachers weren’t especially jazzed about it either. It was simply like Latin to them … a dead language, but part of the core curriculum they were required to teach. Later on, when I had a history professor in college who clearly loved history – it was embedded in his DNA, I think – his love was so contagious, every one of his students found they loved it too.

In the years since that history class, I’ve learned just how much I love history. However, one of the things that disappoints me is The History Channel. So often I’ll sit down to view a program I thought I’d enjoy, but much of what is presented is a fantastical approach to history! Conjecture is okay in its place (if you have some reasonable basis for conjecture) but I’m bothered when people naturally think if something has aired on The History Channel, it’s completely factual. Viewers are hoodwinked into believing what’s presented on some programs, without ever knowing it’s not based in fact!

Of course, this is the culture in which we’re living. Equally bad, people tend to read things on the internet which are quickly set into our memory banks as fact. Few people take the time to check sources and confirm whether the “facts” as presented are true or not. And as people become more informed, they end up becoming more ignorant. Am I wrong about this?

So when I saw the post below on my grandson’s Facebook timeline, I was interested that he had made this observation. He wasn’t alive in 1980 … and I hardly remember it! I was mothering small children then so my attentions were definitely distracted from what was going on in the world. Oh, I remember the Russians fighting the Afghans. I even remember (though vaguely) the US using back channels to supply the Afghani rebels.

But I was surprised my grandson had taken time to consider what our country was doing in 1980 and then to note the similarity between 1980 and 2014. And he certainly offers a perspective that should give us all pause.

Will the US never learn?

2 thoughts on “Doomed To Repeat”