The picture on the left was taken in October as the trees began to change colors. I love the rich variety of color Fall bestows upon us every year.

Taking a closer look at the right third of the picture, the remnants of a barn can be seen between the two trees. Look closely. It’s basically just the bones of what was at one time a useful building for a large farm.

This dilapidated barn (across the lane and west of our home) was the only structure still standing when we moved to this address in 2009. During winters when the wind blew mercilessly from west to east, corrugated metal sheets of roof clattered and banged. The wind would raise the sheets from below, bang them around and loudly slam them to the frame. Many times, I wondered whether a piece of roof would rip loose and end up on our front lawn (or worse). Had I known the barn was not long for this world (at least in its present form), I’d have taken more pictures.

The picture at right shows the barn yesterday. Of course the trees in the foreground have shed their leaves, so the barn is easier to see. But yesterday, workers came and began dismantling the structure. My suspicion is that they’re reclaiming the weathered barn wood for other projects. Everyone who’s looked at the structure speaks about how nicely weathered and beautiful the wood is.

I’m sorry the barn will be razed. Many a stormy day, cattle sheltered inside. They meandered up and down the fence line that borders the road there. They grazed all around the barn and the scene never failed to spark my curiosity about what that old building had seen through the years. 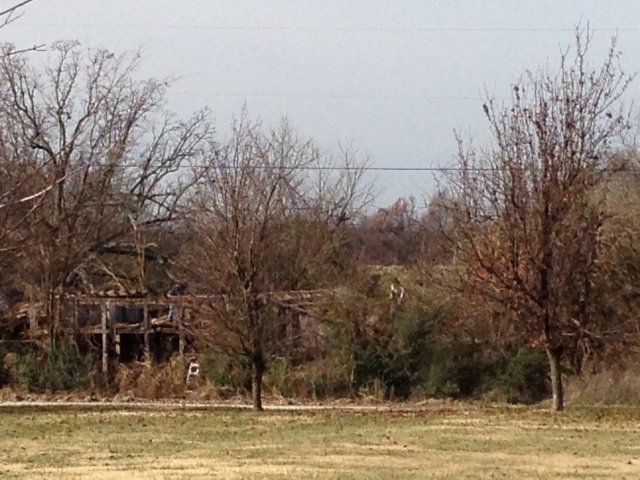 For now, here’s what’s left of the barn. The beautiful arched roof (with those metal sheets of roofing) are gone. About all that’s left is a skeleton, the studs that formed the ground floor walls. I don’t know if the workers plan to return and remove these bones, but it seems an ignominious end to a once-substantial structure.

I happened across a blog by a writer/photographer who posted a photo-essay here in which she has captured numerous barns. Her blog is titled Minnesota Prairie Roots and by the look of her photos, she’s a serious student about barns whereas I’m the most casual of observers. My barn (which wasn’t really mine at all) is modest in comparison to the ones pictured in the photo-essay. I don’t know what the distinctions are between various types of barns, but I’m thinking Minnesota Prairie Roots would know.

For now, I’m adjusting to a new view from my front door. My brain reminds me:  time marches on. My heart argues back:  why does it have to happen outside my front window?

2 thoughts on “Down To The Bones”