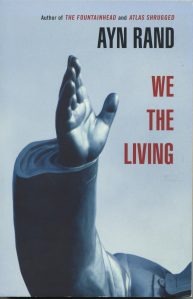 My reluctance to cede precious time to Ayn Rand’s writings (to which I alluded in my previous post) softened last year when I tackled her debut novel, We the Living (WTL).

A mere 450 pages, the book depicts the ongoing struggle of men and women in the days after the Russian revolution. Rand selects themes that are altogether too familiar today:  one’s seeming helplessness in the face of encroaching government, the rising tide of cynicism, unexpected betrayals. The main characters face typically human problems, but Rand’s dystopian vision was (for me) the memorable takeaway.

Though an interesting read, WTL is a window into Ayn Rand’s vision — I’ll summarize it with two words:  “no hope.” (Her worldview seems intent to reject the idea of hope — just a silly notion.) Don’t get me wrong. I’m not saying only “happy endings” are acceptable to me. Fiction tells the human story — warts and all — meaning happy endings may be rare … but hopeful endings don’t have to be.

Consider another classic, Boris Pasternak’s Dr. Zhivago, another novel set during and after the Russian revolution. As in WTL, Pasternak’s characters are muddling through — doing the best they can as circumstances threaten to overwhelm them.

A physician, Yuri (the title character) arrives home from war to discover his family’s home has been seized by the Communists. Instead of occupying the home they formerly enjoyed, Yuri’s family has been apportioned “quarters” upstairs, while all other rooms in the house are inhabited by strangers. The family’s high-quality furniture is being used for firewood. The narrative paints a bleak picture.

Yuri and his family experience the range of human emotion as ruling authorities institute dictatorial “reforms” and intentionally dehumanize the people. Yet each time a new indignity arises, Yuri digs a little deeper into his soul for grace to endure. (The novel also weaves a tale of forbidden love through its pages.)

There’s a love story woven through WTL also. Unfortunately, Rand’s main character Kira observes her relationships through a utilitarian lens. The shades of gray that permeate the book produce a tepid “love” story where couplings seem to happen more out of desperation than from passion.

Both tales are tragic. Both main characters suffer similar fates. But one novel celebrates life — even in grim circumstances. The other novel presents a drab, meaningless and fatalistic march toward annihilation.

What sets Dr. Zhivago apart from WTL is Yuri’s ability to transcend. Transcendence is the quality that, through the ages, has enabled men and women in dire situations to grab hold of a vision beyond themselves. It is that spark in the human spirit that drives us — compels us — not to give up and never to give in. My sense is the ability to transcend life’s horrors is embedded within our DNA; it is part of Imago Dei.

Fiction feeds our souls. When a writer creates fictional characters who are incapable of transcendence, the reader may “feast” but never reach satiety.