My printer/copy machine is just about the most reliable piece of machinery I have. The timer on my stove lets me down. It’s on the other side of the house from my office, so when the buzzer sounds while I’m in my office, I often fail to hear … and it stops buzzing after about 30 seconds. Same for my clothes dryer in the laundry room. I can plan to hang up shirts at the end of the drying cycle, but if I don’t hear the buzzer, all my well-intentioned plans are for naught. Likewise, no matter how closely I watch it, the toaster burns my toast. The cuckoo clock randomly stops, even when the weights are at the top. 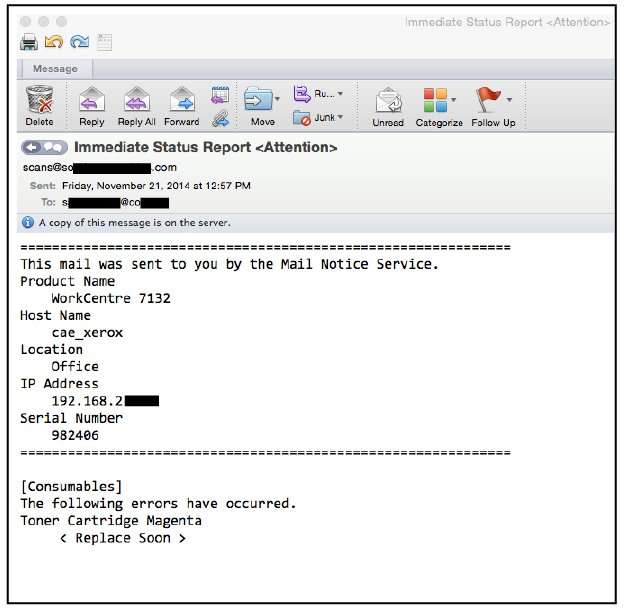 But the printer/copier doesn’t disappoint. With its multiple sensors and various settings, I can count on this machine to send me an automatic status report email (see picture above) whenever it’s running low on supplies. At first, it will warn me to order the particular item it requires, and then it continues to print as needed. (I suppose if I didn’t replace the cartridge in question, it would eventually stop printing, but I’ve never tested that.)

Many’s the time, I’ve wished my stove timer and my dryer buzzer were as reliable. I’ve considered a bluetooth or wireless device might do that job well, but have yet to find one. I’ve actually taken to using my cell phone timer in lieu of the other timers and found it keeps me from burning dinner, etc. but there’s still a breakdown in process because it’s so easy to set my phone down in one room and absentmindedly migrate to another room without it.

I got to thinking about this reliability of machinery, especially as it compares to the reliability of people. Granted, machinery can be unreliable. Who hasn’t had a car break down at the most inopportune moment? The first three vehicles our 23-year-old grandson had were fraught with mechanical issues. Over a period of several years, his vehicles spent more time parked and in the repair shop (or needing to be) than he spent time driving them! Perhaps the biggest lesson he learned during that time was the big hole a car tends to rip in one’s wallet.

Individuals, in many ways, are as unreliable as most machines. No matter who they are, they’re going to let you down. Parent, spouse, child, boss or work partner … it doesn’t matter … they will let you down sooner or later, sometimes spectacularly. As if I hadn’t already been aware of this truth, over the last couple weeks I’ve been reminded of it again and again. Friends, neighbors, acquaintances demonstrated (to me) their unreliability in unforeseen ways. 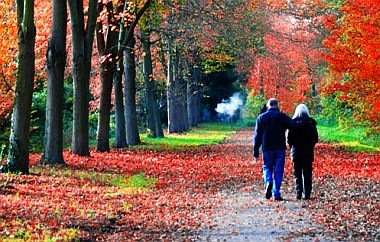 A public person whose public image I’ve admired suddenly shows feet of clay? Wow! Do I feel let down! A local leader or teacher under whose tutelage I’ve been privileged to sit announces an opinion that contradicts mine? Yep, I’m apt to lose my respect for him or her.

But here’s the thing:  the shame is on me. Because I had expectations. I expected friends, neighbors, acquaintances to conduct themselves in their normal, predictable fashions (as I’d known them to do) and when I was surprised that they didn’t, I was naturally disappointed. I shouldn’t have been, but I was.

I know – and readily acknowledge – I’m as unreliable as everyone else. I have never – not once! – sent an email warning to alert people when I’m about to act erratically. I just periodically and unpredictably go bonkers! I’m certain those around me are just as disappointed by my behavior as I am about theirs on occasion. 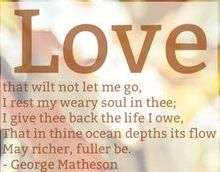 Every so often, I need to be reminded this is the nature of expectations. People I thought I knew? Nope, didn’t know them as well as I thought. Knew their persona, what they allowed me to know, but not them, not really. And me? I seek to be transparent, but don’t always succeed. I am reliably unreliable.

The good news? I know someone who is totally, one hundred percent reliable! I can look at other people – and I often do – knowing they’re going to let me down. I can look at myself  – and I tend to do that often – and recognize when I’m disappointed with myself, how much justification there is for other people to be disappointed in me as well.

Or, I can set my eyes (my focus, my joy, my passion) on the One who will never disappoint. He’s already given His life for me, but He also longs to have daily communion with me … in spite of my notorious unreliability. That’s a love that will not let me go. Why would I ever turn my gaze away?

2 thoughts on “Expect Nothing!”