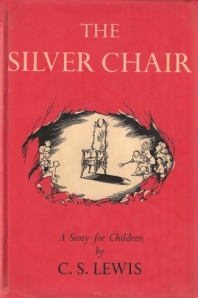 As The Voyage of the Dawn Treader concludes (see previous post), Lucy, Edmund and Eustace catch a view of a range of mountains so high, they recognize immediately they’re seeing into “Aslan’s country.” When the fourth volume of the Chronicles of Narnia begins, Aslan has summoned Eustace Clarence Scrubb and his schoolmate, Jill Pole, back to a precipice on the edge of those mountains … and into the Lion’s presence. Eustace is only on the mountain momentarily; Jill (who hasn’t previously been to Narnia) must first be instructed by Aslan before she is transported into Narnia.

The Silver Chair introduces us to a Narnian world many years later than when Eustace reluctantly (kicking and screaming actually) joined the sea voyage of the Dawn Treader. Eustace’s initial travels in Narnia have stood him in good stead; though he still has an occasional lapse into self-absorption, even Jill acknowledges Scrubb is “different” than last term. His encounter with the Lion has been transformative.

Once more, Lewis brings his characters in The Silver Chair to a quest, singular and quite specific:  rescuing Prince Rilian, son of Caspian X who has grown quite old since he and Eustace parted in Dawn Treader. Rilian has been missing ten years and all efforts to find him have been for naught. With Caspian’s impending demise, Aslan tasks Eustace and Jill to bring the young prince home.As one expects, the imagery in this tale speaks forcefully. There’s a stark contrast between the Overland (where Narnia exists and flourishes amid much light and verdancy), and the Underland (where evil rules, all is dark and foreboding, and spells of black magic stand almost unchallenged). The silver chair, of course, evokes a lesser, though sinister, light. Narrative passages suggest (beyond Narnia) a harsh, uninviting landscape, certainly lunar-like. And this image pervades when Eustace and Scrubb witness lunacy brought on by enchantment.

A “Parliament of Owls” transitions the reader from Narnia’s pleasant daytime activities into a nocturnal setting where Glimfeather, a talking owl, says:  “creatures of Narnia have such unnatural habits … doing things by day, in broad blazing sunlight” and “at night they’re so blind and stupid you can’t get a word out of them.”  Given their preference for night-time activity, the owls offer only an advisory role, delivering Eustace and Jill to another Narnian creature who’ll lead them on their quest.

Lewis creates such charming characters and The Silver Chair gives us Puddleglum the Marsh-wiggle. As with Reepicheep the knightly mouse in Dawn Treader, Puddleglum is every bit as winsome. In a way, he reminds me of glass-half-empty Eeyore, A. A. Milne’s stuffed donkey in the Winnie the Pooh stories. If there’s a way to “put a good face on things,” Puddleglum will be sure to turn a smile into a frown.

That said, the trio does encounter frustrating impediments on their quest. They must cross marshes and moors, face awful and whimsical giants who mean them harm, and Puddleglum’s clueless negativity is an ongoing source of discouragement. They plunge into their most threatening situation when, distracted by the temptations of luxuriant baths, cozy beds and comfort-foods to fill their bellies, they let down their guard where evil schemers plot a grizzly end to the three travelers. (Here’s a clue:  ever seen a recipe for man-pies?)

Deeply spiritual elements in The Silver Chair abound, but the most memorable ones to me occur both early and late. Jill’s initial encounter with Aslan is a masterwork of Grrrrace. With the most tender swipe of his powerful paw, the Lion delivers deserved reproach for her careless acts. When she suggests it’s a case of mistaken identity − “nobody called me and Scrubb, you know” − Aslan sets her straight. “You would not have called to me unless I had been calling to you.”

In the last dozen or so pages, we see how Jill has undergone a like transformation to what Eustace had in Dawn Treader. Before sending them back to England, Aslan gives them a moment on his Mountain to witness Narnia’s now-dead Caspian become slowly transformed by drops of the Lion’s blood. A scene that is at first dreadful and solemn becomes a celebration of joy and astonishment. In the words of the Underland Warden, “few return to the sunlit lands.”

Yet Aslan, with the wild kisses of a Lion, provides this brief glimpse of the waking “at the end of the world.”