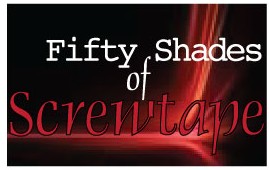 Halfway through my Fifty Shades of Screwtape series, I realized I should have provided (from the outset) the weblink of the winning entry for anyone wishing to read it. Here it is:  If Screwtape Had Watched CNN − the 2001 Grand Prize winner, in which author Amy Schwartz introduces Screwtape’s new charge, a student demon named Scrapetooth. Alternatively, if you’d rather own this work in a hard copy volume, introductory comments on beliefnet.com‘s weblink indicate Schwartz’ entry was also published in two 2002 book anthologies (here and here).

Having read and re-read Lewis’s original work, one cannot help but be reminded The Screwtape Letters is a unique masterwork. Lewis understood his time, the discipline of Christian apologetics and the wiles of the Devil. Lewis hoped his book would be “both useful and entertaining.” Certainly, he achieved those goals and much more. The work received critical and popular praise including comments from The Saturday Review (April 17, 1943) terming it a “remarkably original work.”

Both Amy Schwartz’ prize-winning entry and mine are derivatives. And that’s okay; it’s what the contest required − a contemporary retelling of Screwtape. The retelling could’ve been done a thousand ways. Indeed, 250 unique takes on the original were submitted.

When I was a teenager, I came across a book that doesn’t attempt a Screwtape-type tale but presents a curiously parallel scenario. Hellbent for Election was written by author Phyllis Speschock and features a central character, the newly-deceased Mr. Willfully Hellbent, who stands before the High Registrar (of Heaven) seeking permission to leave because he has “no desire to spend eternity with Believers.” The rest of the book depicts Hellbent in the company of his counselor, an angel named Alexis, examining Hellbent’s antipathy for Heaven-based society. 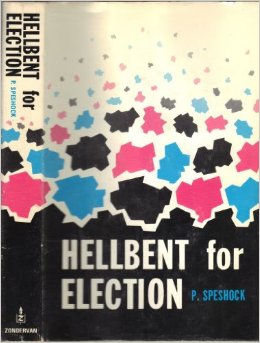 I re-read this book recently, and it mostly stands the test of time. It doesn’t compare well with Screwtape (a stouter apologetic with sharper satire) but Hellbent has other qualities to recommend it. If we use Lewis’s measure, a book that’s both useful and entertaining, Hellbent scores on both counts.

Hellbent’s thought-provoking approach demands a response:  why would anyone want to go to a Heaven populated with the same Believers who’ve annoyed you on Earth?

I’ve tried to track down information about Hellbent’s author but found little. Her publisher, Zondervan, notes a couple other titles by Speshock, but I haven’t read any of those. A history of the publisher, House of Zondervan: Celebrating 75 Years, characterizes Hellbent for Election as one of two “provocative titles published in 1964 ….” (The other “provocative” title was The Gospel Blimp.)

There’s a curious statement in the Zondervan history volume that mentions Hellbent. They cite a review suggesting “Not everybody will like it, but God forgive publishers as well as ministers who give the people only what they want.” I’m wondering whether this review might have soured Zondervan’s enthusiasm to keep supporting the book?

With the post of Missive 7, I’ve posted all of my original contest entry. I’ve enjoyed sharing these posts enough to know writing future posts under the Fifty Shades of Screwtape banner would be a delightful challenge. If you found the first seven posts of interest, I hope you’ll stay tuned for more! I welcome your feedback.