My dad served in World War II. (Read a bit of his story in this post.) With the World War II Memorial (an open-air venue in Washington DC) barricaded (purportedly due to the government shutdown), I’ve had cause to think about my dad’s service many times over the eight days of the shutdown. 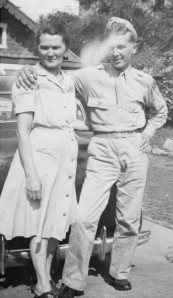 Dad was twenty years old when he enlisted in the Army in December 1942. (Picture to the left shows him in uniform standing with his mother.) Dad’s older brother joined the same day; his younger brother enlisted the following April. Their eldest brother had family responsibilities and begrudgingly remained in St. Louis. Thankfully, all three brothers survived their service to country and returned home to resume civilian lives after the war ended.

Dad and his unit were part of the D-Day assault force at Normandy. (I can only imagine how that must have been for him. It wasn’t a subject he readily talked about.) Being transported toward Utah Beach in a flat-bottomed, amphibious assault vehicle, my dad (who didn’t know how to swim) carried a full pack on his back and, as soon as the ramp was lowered, he and his mates disembarked into water over their heads. The soldiers who didn’t drown worked their way slowly toward the beach where others of their number were navigating around obstacles on the fortified beach. Some had already entered the intense fray against German occupiers. 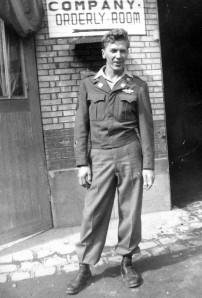 After my dad retired, he returned with my mother to France. I seem to recall my mother said it was a particularly difficult visit and as it turned out, he chose not to actually go back to the beach, preferring the nearby towns. From the distance of so many years, I know Dad needed to go but hauling himself back to that beach was truly A Bridge Too Far. As with most of the soldiers involved in WWII, a part of my dad died on that beach.

Were Dad alive today, he’d be 91. He died in February 1994, just months shy of the 50th Anniversary commemoration. Had he lived long enough to attend, I think he still would’ve stayed away. Most of the men with whom he’d served predeceased him, and being there previously with my mom was simply too painful.

Each time I’ve viewed the film Saving Private Ryan, I’ve wept. I can’t help it. The film centers around rescuing the one remaining brother in a family of brothers. So much of the action feels desperately familiar to me. And several years ago, when I visited the World War II Memorial in Washington DC, I was similarly moved, struck with awe at the beauty and solemnity of what the memorial represents.

When I heard about the National Park Service shutting out elderly WWII veterans due to the government shutdown, the news was terribly disturbing. So few of these heroes are still living. Fewer still will be able to make a return trip to DC. Denying them access (and the precious time for meditation) at this open-air structure dedicated to their heroism is an insult that confounds reasonable explanation. I grieve for them. (I’ve read various reports that veterans later received a special dispensation to enter, but I haven’t been able to confirm that.)

My daddy didn’t live long enough to raise his voice in unity with these blessed elderly men. I feel like I must do it on his behalf. Without raging at any particular person or organization, I firmly believe whoever gave the order to close the Memorial should be relieved of duty immediately … and air-flighted into the nearest combat zone for recompense.

2 thoughts on “God Bless Our Vets!”