Heading off to college for me was a family experience. My dad would load into the family vehicle all the belongings I thought I needed, my mom would pack sandwiches and snacks into a cooler, and we’d move on down the road with at least two of my siblings coming along for the ride. The first year, we headed north to Oak Park, IL. The second year, we traveled southwest to Siloam Springs, AR and I became a transfer student at John Brown University. 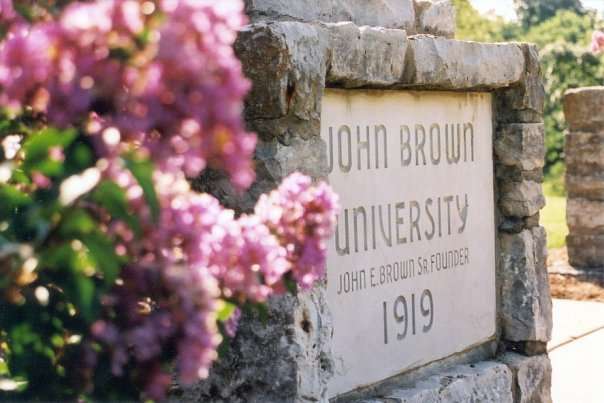 Having spent my freshman year of college in a suburban setting, I still remember that initial drive through sleepy little Siloam Springs (less than 6,000 people at that time) to its western border. The tree-canopied lane (West University Street) that meanders along Sager Creek from downtown Siloam Springs leads west toward Oklahoma but makes a gentle right turn as the above sign comes into view. (Half a mile more and you’ll transition from Arkansas into Oklahoma.) With this stark contrast (from where I’d spent my first year), I committed that scene to memory, thinking to myself, while not ivy league, this idyllic setting definitely epitomized the halls of ivy as I’d imagined them.

Over the next school year, I was privileged to establish friendships that have lasted a lifetime. JBU is where I met my Beloved. We married just before his final semester began. (My actual graduation came years later.) 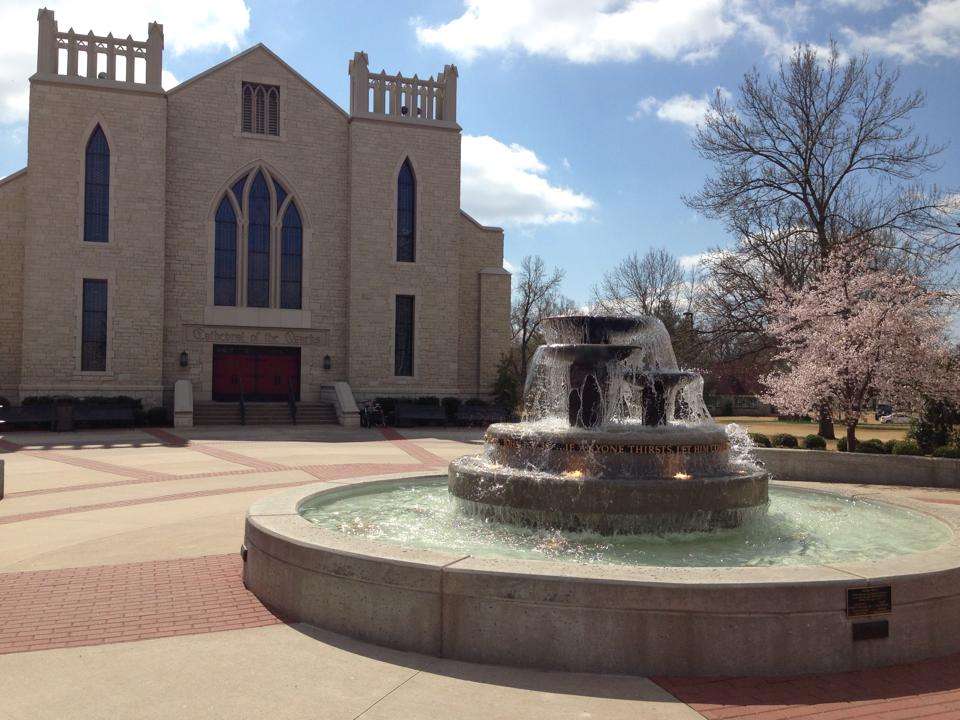 JBU schedules an annual Homecoming Weekend. I remember when we were students, this would be the weekend when a horde of old geezers came to campus. Their number was large enough to create the illusion (for students) that an invasion by the blue-haired set had taken place! It was also an occasion where our meals were relocated to temporary cites because all the older folks had to be accommodated for their meals and activities. As a young student, I remember wondering what drew these older folks back to their alma mater. Were they trying to recapture their youth … or what?!

JBU’s Homecoming Weekend is happening this weekend. While the notion of recapturing one’s youth doesn’t even compute for us, this is not the first time we’ve enjoyed the festive atmosphere of Homecoming. And we’ve come to understand the joy of nurturing so many friendships that began during our school days is what motivates us to keep those friendships alive. We enjoyed a delightful dinner with friends last night. Through the years, there’s been a sustained energy for class reunions to create more memories. Next year, the 45th anniversary comes into sight, and we’ll savor it like no previous reunion, drinking in the beauty of friendship as a sweet wine.

For our twentieth class reunion (1990), I composed a poem that I’m sharing here. It’s amusing to re-read now from the perspective of another twenty-five years distance (almost). The notion of “mid-life squeaks” has given way to real senior debilities for some; charging up College Hill today would be foolhardy for most of us. Individuals who once were numbered among us have gone forward to their eternal Homecoming. Understanding the transitory nature of this life, we cherish what moments we have left together … this side of our Forever Reunion.

As a youngster, I believed the sentiment that “you can’t go home.” I was pretty sure it would be a disappointment for me; things are rarely the same as you remember them. But my perspective has changed as I realize the going home doesn’t so much apply to the place but to the people who are there. Now that I’m one of those old geezers, I realize it’s the people who make Homecoming such a pleasure. (I hope current JBU students are blessed with a similar experience one future day.)